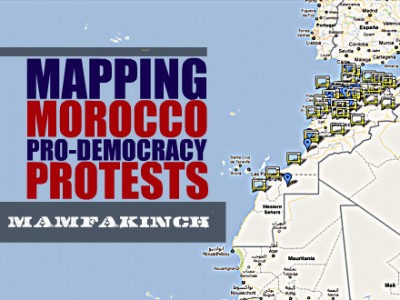 On October 13, Boudaroua Mohamed, a young stood militant of the 20F movement died in Safi (350 km. South of Rabat) after ten days of unemployed graduates sitting in the ANAPEC (Moroccan INEM ). The police described as an accident or even suicide, while the rest said that death was caused by the police. His family and friends claim that a police officer pushed him from the roof of the ANAPEC where was the manifestation. The next day, the grief of the family became a demonstration against the repression.

On October 15, global day of indignant mobilization, young Moroccan militants came to demonstrate in Rabat against capitalism and for a global democracy. When they were about to finish the preparations in the local of ATTAC / CADTM Morocco, police surrounded the place, stepped inside, struck and arrested militants which were later released. The incident has motivated a statement in which ATTAC / CADTM reported violation of democratic rights in Morocco.

During the 15-0 in Morocco, this was not the only repressive measures. Around 16:30 pm about thirty artivists dressed as clowns were beaten by the thugs of the Makhzen (State), led by Amine Elbardoudi, leader of the royalist youth anti-20F and founder of the armed unit ‘Allah, Nation, King’, according to ‘Mamfakinch.com‘. Also a demonstration organized by the February 20 movement outside parliament was repressed with brutality in Rabat.

The repressions, imprisonments, tortures and even deaths of members of the movement 20F in Morocco become recurrent. On September, the indignant and ‘enrage’ rapper Belgouat Moad, aka The Hakeda, was arrested during a demonstration.
A key witness in the case of the detained rapper and activist Moad Haked, Nabil al-Qurafi, was arrested some days after in front of café France in Casablanca. Pro-democracy activist and film director Maria Karim and Abdelhaq Bellghouat, Moad’s brother, were also arrested the same night.
Earlier a number of activists and militants of the pro-democracy movement February 20 headed to police headquarters in Casablanca and staged a sit-in to demand the release of the witness and the two activists.

Last June, in Safi, died another young man, Kamal Amari, member of the movement 20F, in bizarre circumstances. It happened after the repression of the demonstrations of May 22 to 29. (Video on the top more this one and this one). That day, returning from a peaceful demonstration, Amari was approached by seven police officers who beat him severely, witnesses said. He died in hospital Mohammed V of Safi. The international NGO AFD is investigating on his death.

Press Communicate from the 20F movement:

The peaceful protests of the “Movement of February 20” continue all over Morocco.
This movement which raises claims of deep reforms (changing the form and not the nature of the regime) is becoming stronger and guide hundreds thousands of citizens in weekly and sometimes daily events since February 20, 2011.

The slogans are becoming more radical and the organization more controlled every day by coordinators locally elected and following the decisions of the general assemblies, who meet permanently, demonstrating an extraordinary creativity not preceded in the history of the kingdom!

All the promises of reforms initiated by the speeches of the Moroccan sovereign nor the oppression and abuses of force applied by the Police, often supported by some “pro-regime” against the militants of the movement, nor the machinations of political parties seems to make renounce the movement to its project of change to a new Morocco governed by a parliamentary monarchy, of dignity and freedom, social equality, political democracy, with an independent judiciary power and free media …

Regional and international conditions characterised by the Arab spring and the revolutionary air of the indignants in Europe and in the world, certainly influence the political street in Morocco and gives a considerable moral support to this movement of young decided who manifests audaciously and doesn’t hide its intentions which, in a time very close, were among the Tabout and insuperables red lines.