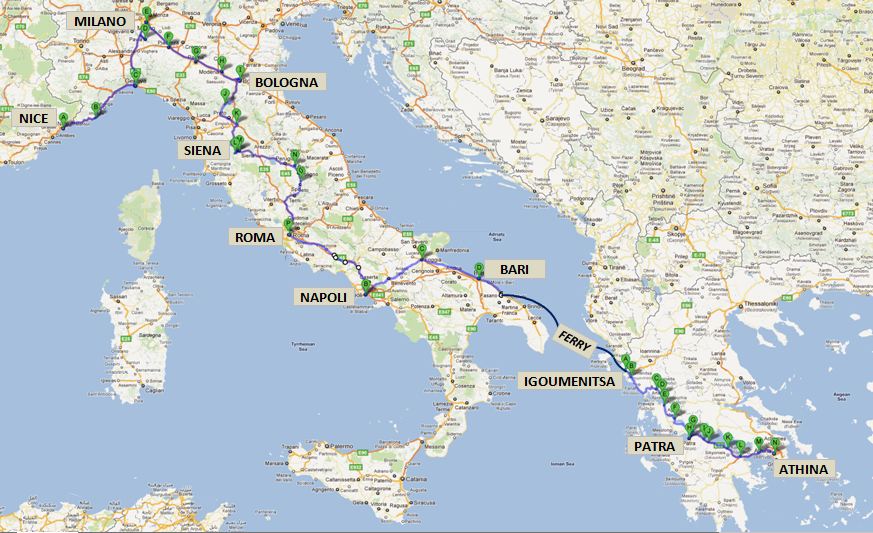 After our participation in AgoraBrussels and 15th of October global manifestation in Brussels, we decided that our march couldn’t be stopped.
Our desire is to continue spreading our message and connecting with other assemblies of the world, the International March to Athens is
born as an open project to all who wants to support and participate in it.

We will meet in Nice the 5th of November 2011 after the G20 Summit (30th October – 4th November) to organize ourselves and go few days afterwards. We will pass by different villages and cities of Italy, cross the Adriatic Sea from Bari to reach Greece, then we will walk to Athens as final destiny. In both of Rome and Athens, we will participate in the *GlobalAgoras* witch will be organized at the arrival of the marches (more informations at the end of the article).

The march will be formed by small groups of walkers and cyclists (12 to 25 people), witch will advance by parallel roads to reach out more
people on the way. The idea is to join in the big cities then to walk parts of the distance together. Every time that the number of the group reaches about 25 people, the main group will be divided in two independent groups. And in every village the march will call for assemblies and will exchange experiences, problems and ideas.

The values that unite the different marches are the horizontal relationship, the active participation, the non-violence, and the integration of the members. We propose to continue the work of assembly and the decision making through the building of consensus, practising the direct democracy. We will also work to reach the sustainability of the march and to convey a message of respect to the environment.

We make this march to animate people to take the public space and meet each other, to talk about politic and decide for their own lives. We make this march to propose and learn, to inspire and be enriched, to speak and listen, to give and receive. We want to reach Rome and Athens to bring a message of hope and unity. Most of all, we want to participate in the GlobalAgoras in order to contribute to the international coordination, to prepare projects in common, to confront together our problems and create a just society for everybody.

We walk for dignity. Together we can reach the Utopia. INTERNATIONAL WEEK AGAINST THE FINANCIAL DICTATORSHIP FOR A REAL DEMOCRACY NOW!
#AKROPOLIS2012
In April 2012, to celebrate the arrival of the Marches to Athens, witch left Brussels to cross Europe from the new center of governance until the roots of the democracy, and to prepare a new year of global actions, we are organizing a huge international meeting down to Akropolis in Athens in order to create a space of reflexion about common actions, alternative economies and direct democracy.
Stage1/ COMMON ACTIONS AND STRATEGIES
Every morning from 10h30 to 13h30 (+1h marge) will take place a plenum:
Day1: CIVIL DISOBEDIENCE, THE RIGHT TO ILLEGALITY
Day2: NON VIOLENT ACTION AND PACIFIC RESISTANCE
Day3: HACKMEETING, ERA OF THE CYBER ACTIVISM
Day4: TO A PERMANENT GENERAL STRIKE WITHOUT BORDER
Day5: SQUAT MEETING, EXPROPIATION & AUTOREDUCTION
Day6: REJECTION OF THE ODIOUS DEBT AND OTHER ACTIONS IN JUSTICE
Day7: FUTURE STRATEGIES OF THE MOVEMENT AND ELECTIONS, A CALENDAR FOR 2012
Every afternoon from 15h to 18h will take place the action group meeting, a good opportunity to know each other, create international affinity groups, share experiences and planificate direct actions in Athens like occupy Akropolis, open the highway and metro checkpoints, clown army and love police, autoreduction, squatting…
Stage2/ ALTERNATIVE ECONOMIES AND POST CAPITALISM
Every morning from 10h30 to 13h30 will be open a big alternative fair with the exposition of producers, collectives or inventors to promove organics products, alternative projets and revolutionary ideas. We will also have the possibility to change euros to alternative currencies and exchange products and services.
Every Afternoon from 15h to 18h (+1h marge) will take place a plenum:
Day1: SOCIAL CURRENCIES AND PRODUCER NETWORKS
Day2: BANK OF TIME AND SELF EMPLOYMENT
Day3: COOPERATIVES AND SOCIAL NETWORKS
Day4: ALTERNATIVE COMMUNITIES AND REPOPULATION
Day5: FOOD SOVEREIGNTY AND PERMACULTURE
Day6: ECO-INDUSTRIES AND POST CAPITALIST AUTONOMY
Day7: CREDIT COOPERATIVES AND TRANSITION DAY
Stage3/ DO IT YOURSELF IN THE FREE AREA
This Stage will give the opportunity to everyone to propose a conference, animate a debate, give a workshop or make a performance in its own scenario.
An information point will receive the volunters and external propositions. The organization of the program will be self-organized in assembly.
The Kitchens will also be in this area where everybody will can learn to cook vegan and will serve a breakfast every morning from 9h to 10h30, a brunch between 13h30 and 15h and a diner from 19h to 21h where the people will can eat watching improvisations.
Stage4/ GLOBAL AGORA, PRACTICE OF THE DIRECT DEMOCRACY
Every morning the volonters will clean the biggest area of the Zone and during the after noon the artists and musical bands will make repetitions.
Every day at 18h30 opening of the Central Stage with an artistic performance “Poltik’art” from different parts of the world, the people will be autorized to eat. Every Night from 21h to 23h (+1h marge) will take place the General Assembly with a lecture of the consensus buit during the day and a debate around this topics:
Day1: INDIGNANT MARCHES AND EXTENSION STRATEGIES
Day2: PRINCIPLES OF THE MOVEMENT, NON VIOLENCE, APARTISM…
Day3: ASSEMBLEARIST METHODOLOGY AND CONSENSUS BUILDING
Day4: WORKING GROUPS, STRUCTURES AND ORGANIZATION OF THE MOVEMENT
Day5: INTEGRATION OF OTHER COLLECTIVES TO A CONVERGENCE OF FIGHTS
Day6: GLOBAL CONSENSUS OF MINIMUMS DEMAND
Day7: INTERNATIONAL ASSEMBLY AND GLOBAL COORDINATION FOR 2012
Every Night at 23h: The Music in revolution with engaged musical bands.
All the nights until the morning: Cine Forum in the tematics of the day.
This is the first proposal, we invite everybody to contribute to this amazing project:
Mailing List: Akropolis2012@lists.takethesquare.net
Contact: Niel@squat.et
Web Team: Acracia@riseup.net