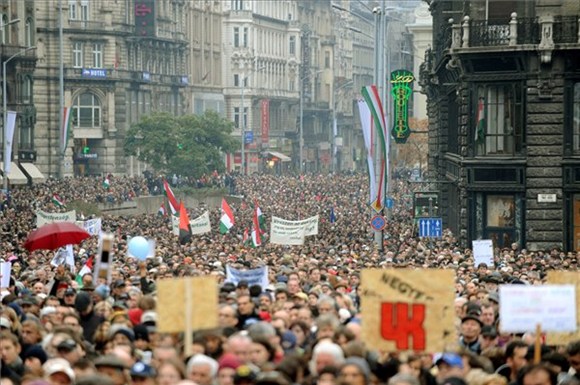 About 100 thousand people rallied in the heart of Budapest on 23rd October 2011 demanding system change. The demonstration ended without any atrocities and, despite the unfavorable weather conditions, the organizers managed to repeat the same turnout they had drawn in March 15.

Independent Hungarian newspapers emphasize the “liberated” spirit of the protest in their summaries. Young and old people stood shoulder to shoulder to protest the government. The details of the civil sphere initiatives represented at the protest and the various causes were as follows: the movement against Hungary’s media law, the constitution, the treatment of the Roma and the homeless, government attacks on the country’s cultural institutions, the erosion of democracy, the push-back against workers’ rights and the arrogance of the government and its rule by force.

At the end of the rally an initiative to elect an “alternative president” was announced by the spokesman of the demonstration (One Million for the Freedom of the Press in Hungary), which is the new campaign leading up to their next protest on March 15 of next year.