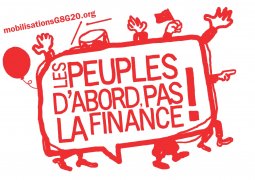 “The G20 was formed by 20 of the richest countries in the world, in disregard of all the rest. Though it proclaimed itself to be the guarantor of world economic and financial stability immediately after the financial storm hit in 2008, it has done nothing to protect the people from this major crisis. On the contrary, the G20 upheld the dictatorship of the financial sector, which continues to exert its power over all aspects of our existence: housing, employment, education, agriculture, climate, retirement pensions, knowledge, biodiversity… Through its actions, the G20 reinforces the actors and mechanisms at the origin of the crisis, while making citizens pay the price.

We know responses to the global crisis that are truly democratic and built in solidarity will not come from the leaders of the world’s richest countries, but rather from the peoples themselves. We refuse to give the powerful the right to impose their solutions for the crises they themselves have generated.

we need struggles against financial opacity and deregulation, the illegitimate debt in the North and the South, against austerity policies and in defence of public services, against false solutions to climate change and in favour of production and consumption models that preserve the planet, against job instability and for decent work, against speculation on raw materials and for food sovereignty, against dictatorships, militarization and colonialism and for the democratic rights of the peoples…

Through our practices and proposals, our movements demonstrate that alternatives do exist. Universal access to fundamental human rights and the protection of our planet can only be achieved through a just distribution of wealth, the adoption of other modes of development and democratic management of the common goods.”

From the 1st to the 4th of November a camp will be established face to the G20 in Nice, and ready to welcome hundreds of indignants from all around the world for a big international march the 1st, with demonstration in the centre of Nice, rally and concert, and a lot of actions during the next days like on Thursday 3 against tax havens in Monaco or the 4th. in front of the G20 in Cannes.
The indignants walkers and other “indignados” are preparing some workshops.
A People’s forum is organized for the occasion under the slogan”People First, Not Finance” supported by Dakar world social forum.
The Program of this meeting was built around six themes:

15h – 18h : International demonstration (departure from the center of Nice)

8 PM : United event on our proposals and alternatives

10am – 2pm : United action against tax havens at the border with Monaco

8 pm : Banquet of the alternatives / Assembly of the struggles

Friday, 4th of November : United press conference to be completed