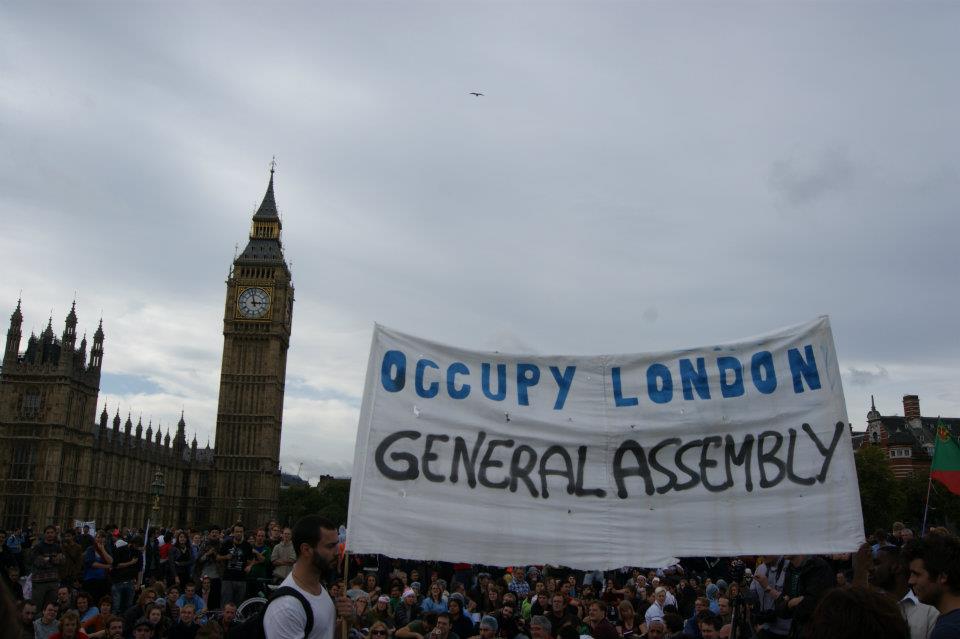 London has been occupied since the 15th of October. More than 2500 people gathered outside St Paul’s Cathedral in London City to take Paternoster Square, home to the London Stock Exchange. The event was part of similar actions in 900 cities worldwide, and the place it targeted is highly symbolic; though the Stock Exchange in London is virtual rather than physical, the square is the heart of London’s financial district and an important iconic site. Ironically, the square is private, and police brought out horses to block the gates at all sides. After rallying for an hour, a meeting was called at the steps of St Paul’s. Police blocked entry to the square for several hours and attempted to aggravate the crowd at night, but had no success. The movement decided to stay, and went from ‘demonstration’ to occupation. Hundreds of people continue camping out on the streets of London as the occupation enters its 10th day.

The movement calls themselves ‘the 99 per cent’, and aspire to include everyone who are not part of the 1 per cent bourgeoisie that rule the financial and economic system.  Quoting from the initial statement, agreed on through consensus at the second day’s general assembly, OccupyLSX wants ‘structural change towards authentic global equality’. They do not yet have all the answers, but are gathering together and growing in numbers in a space that functions on different premises from our current society. The democratic space aims to be open, inclusive, and let everyone speak. If we return to the roots of democracy, the demos of ancient Greece was one where all free men had the right to speak; at Occupy LSX everyone are free and equal participants in of the mini-society they have set up. No questions are asked, no demand on identity of legitimizing who you are; it is enough for a person to be present, stand up, and voice their opinion. A flat, non-hierarchical structure dominates, and despite the fact that someone has to be in ‘charge’ of certain things, they are by no means chiefs or bosses. Though they have been labelled ‘anti-capitalist’ by media, Occupy LSX houses a much broader agenda, and the political spectrum present amongst the occupiers stretches from the far left through the centre and the right; anarchists and bankers sleep side by side in the surprisingly ordered and structured camp.

Self-organization is proven by the speed at which the camp appeared;  food, shelter, and communication was all discussed on the first night, and one week later it has an information point, a ‘Tent University’ giving regular talks, a prayer tent for all faiths, as well as a functioning kitchen surviving off donations and a self-maintaining 24hrs voluntary service where people help out whenever they have a chance. During busy times, people ‘just dive in there’, to clean, cook, boil water, and help maintain a constant small food buffet that is free and open-access to all, no questions asked. A small army of ‘tecchies’ are making sure the occupation stays connected, and is in contact with all the occupation movements across the globe through a web page, twitter, and facebook. Messages of support and solidarity stream in, and it is a powerful tool for organizing the camp, clearing up misunderstandings, and attracting more people to come join or drop by for a visit.

The occupation is  right near St Pauls church and is working hard to be open and inclusive; the message is  being communicated through non-violent means of living the alternative to the capitalist crisis. This does not mean it’s problem-free; sanitation, noise, visitors to the church, as well as other issues keep cropping up, but they are discussed and worked actively on. When St Pauls church withdrew their support last Friday, there was a big discussion and an Emergency General Assembly where the camp decided to stay, as they had complied with all complaints; from fire hazards to access to the steps, and therefore saw no reason to move. On the contrary, the camp expanded onto a different site at Finsbury Square this Saturday, and now has two campsites from which to continue. Their organizational strength will help them sustain it for a long time yet.

So what are the effects of this occupation? And is this what democracy looks like? The occupation is unlikely to grow in numbers of the 99 per cent it claims to represent, but from polls in the Guardian it is backed by the majority of London’s inhabitants, and the recent statement of support from Unison, UK’s largest Trade Union, is certainly a sign that the movement is bigger than the squares it takes up. It has shown that people are able to organize together spontaneously and without aiming for leadership or profit, and created a space for meetings and networking for activists on both a national and international level. Outreach is constantly discussed, and is likely to be a key area of focus over the next weeks. ‘We are just starting a long process’, many people say, one which aims to be a model of ‘true’ democracy. Concensus-based decisions means everyone has to agree, and it is arguable a slow, messy process, yet one that seems to have kept people united, and attracts evermore support. OccupyLSX are performing an alternative to the current system, carving out a small space where people can act, live, and function on the premises described above. This isn’t just what democracy looks like, but what it is like, right here and now. Not perfect, but slowly learning, growing and discussing the alternative to the system they’ve been caught in until now.

This article is by Ragnhild Freng Dale, the commentary is a combination of personal reflections and conversation with people at OccupyLSX during the first week of the occupation.