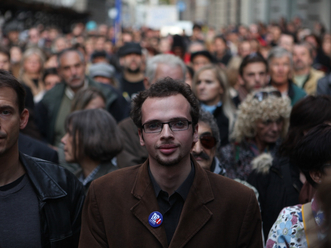 The wave of demonstrations of civil movements in Hungary are in line with the global trends, namely the mounting resistance against the austerity measures and antidemocratic tendencies. These unfavourable developments in the wake of the multiple crisis have triggered the dissatisfaction of the
majority of the society both in Hungary and all over the world. Three years after the global crises broke out nothing has fundamentally changed. Profits
and bonuses are booming for the big corporations and financial oligarchs, while people are paying the price of their reckless speculation with falling
living standards, cuts in public services and growing unemployment. On top of that the private debt has put many households at the brink of tragedy.
People are fed up and want change.

The first big mass demonstration was started this year in March, when the Facebook Group called One Million for the Freedom of the Press rallied in
Budapest demanding the change of the media law.

The second significant mass protest of civil movements together with the Facebook Group of One Million for the Democracy in alliance with the trade
unions [the so called D(emocracy)-Days] was held end September/early October demanding social and labour rights and rejecting the austerity measures. At the end of the series of protests the organizers of the D-Days has announced the establishment of the Hungarian Solidarity Movement (HSM) as a civil alternative to the current party/parliamentary system. Key figures of HSM declared to build up a broad civil movement from bottom up and to set up alternatives to the current opposition parties. For short term HSM wants to remain a civil movement and might be converted into a political party later.

The global Day of Action named “Wold Revolution- Real Democracy Now!” on October 15 was initiated by the Spanish indignados to occupy the public
squares and streets. The Democracia Real Ya! (DRY) Movement has got inspirations from the uprisings in Egypt and Tunisia as well as from the
Occupy Wall Street protests. All these demonstrations are common in targeting the global capitalism. The Hungarian DRY-movement follows the
Spanish methodology and shares a strong commitment to direct (participatory) democracy. The main characteristic of the initiative in Hungary is that it is free from any party or NGO influence, the organizers of the October 15 event were individuals only.

The recent big mass demonstration of the civil movements was held yesterday in Budapest near Elisabeth bridge, where tens of thousands of people
rallied and demanded systemic change. All of the seven speakers sharply criticized the government for its policies and antidemocratic, dictatorial
decisions, the treatment of the Roma and the homeless, the attacks on the country’s cultural institutions, the erosion of democracy, the violation of
workers’ rights and the arrogance of the government, its rule by force. Organizers of the demonstration distributed fifty thousand press pass saying
all demonstrators must be journalists. Spokesman of the One Million for the Freedom of the Press announced that within two weeks a campaign will be launched to seek for an “alternative President” who will be inaugurated at the next protest on 15th March 2012, because the official media do normally falsify and be little the event.