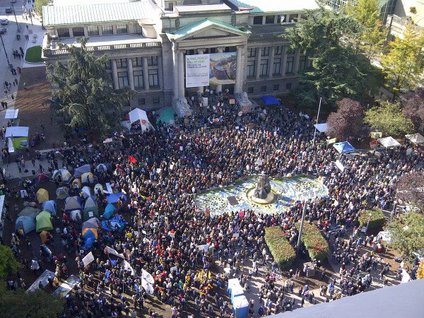 Today at Occupy Vancouver the people moved from the eternal process of the general assembly to the exciting world of direct action. The Run on the banks action marks an escalation on an occupation that’s been busy building infrastructure. This was not an official occupy Vancouver action but an offshoot as stated on occupy Vancouver’s twitter account. Now that it’s become clear that the rain will not scare away the die hards, autonomous groups can disperse their actions outside the camp and disrupt the corporate death machine.

About a thousand trouble makers made their way through the streets of Downtown Vancouver with the intention to occupy corporate banks and encourage folks to close their accounts.

And that they did. This Royal Bank of Canada was the first victim, with about 50 people jamming the lobby while some withdraw their cash.

At the Bank of Montreal people shut down their account and moved to other options.

But the cherry on top was the Occupation of TD AKA Toronto Dominion bank right next to the Vancouver Art Gallery camp. A home stereo was cranked to the max and the people rocked out on top of teller desks and furniture.

An idea was floated around to continue occupying through the night, but the group could no reach consensus, and the process ultimately disrupted the party.

The police quietly moved in and occupied the spots where tellers once stood to protect their corporate masters. Finally the group decided to move out en-masse and avoid arrest.

This action is an much needed escalation for this movement and many of those who took part seem to be psyched about the possibly of what comes next…..

More videos from other cities in transitionday.takethesquare.net