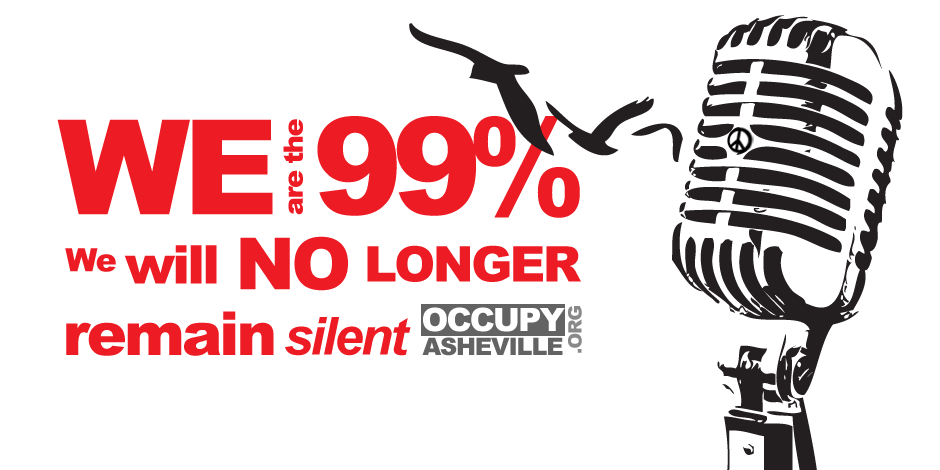 We began on Saturday, October 1st, 2012. There has been a General Assembly (GA) every day.  We’ve been blessed with good weather and lots of fresh faces showing up.  Numbers are steadily growing.  Treasury is steadily growing.   Businesses are contributing food & necessities.  Businesses & churches are opening up their private property for the Occupiers to camp on until the city (hopefully) lifts the current curfew and ban on camping in Pritchard Park at the next City Council meeting this coming Tuesday, 10/11/11 at 5 pm.   Our Outreach & Legal groups are working on the petition / resolution to present to the City Council at the meeting.

The Mayor’s Office, Asheville City Council and the APD are in fairly constant, friendly, informative dialogue with OA,NC.   I feel that they realize that they are also part of the 99% and tacitly support the Occupy movement.   The APD directs traffic during the pickets to keep everybody involved safe.   Otherwise we seldom see police around more than normally.

I’m very impressed with the skills and abilities of the working groups.   For example:    The media group streams live video feeds.   Everything is recorded.   The medical group has a young, practicing physician from one of the local hospitals, a nurse, and 2 people with some EMT training plus other worker bees.   We have an attorney or two.   Everybody is energetic, inspired and committed to seeing this through.

We emphasize NON-violence & keep a cool head under stress.   We are planning non-violence techniques training classes.

We are drawing up an OA position statement but for now are standing in solidarity with OWS   and supporting their statement as our own.

We need you to tell everybody you know:    Come to the City Council meeting on Tuesday afternoon at 4 pm.   Fill the park across the way from the main entrance to the City Hall where the City Council will have their meeting at 5 pm.   We’re arranging live music & “Soapbox” opportunities.   We want the Council members to see the support we have as they go in to start the meeting.   We’ll have “primary’ speakers inside the Council chambers, ready to address the Council.   Come on out to show your support and have a good time doing it.

My last update ended with the Sunday afternoon Occupy Asheville General Assembly (GA) on 10/9/11.  The working groups left the GA with various assignments for our preparations to approach the Asheville City Council on Tuesday, 10/11/11 to petition the City Council to allocate to Occupy Asheville (OA) a piece of public property that OA could use as a permanent base camp.  Rosetta, of Rosetta’s Kitchen, supplied petitions for businesses to sign showing their support for OA.  Other petitions were distributed for anybody to sign to show their support.  The legal team was in high gear getting their presentation together.

We prevailed!  The Asheville City Council designated a paved parking area under the Interstate 240 bypass bridge at the end of Lexington Ave., as a permanent base camp for Occupy Asheville’s use.  The time-frame allotted for our use of the park was left virtually open-ended, with the permit extending to April of 2012.

While the parking area itself is extremely small, it has electricity & running water for our use.  The Interstate 240 bridge overhead provides shelter from precipitation and the paved parking lot under the bridge will not turn into a muddy quagmire when it rains.  We have made arrangements for Port-O-Johns to be set up & serviced regularly courtesy of local unions.  I believe that the general consensus is that we are very happy to have made this arrangement with the City.  Entire families can participate in these historic events that are going to shape the children’s lives forevermore.  Parents can bring their children to a hopefully safe place where the parents won’t have to worry about being arrested, locked up and their children being left unattended, to say nothing of the trauma of the children seeing their parents being arrested and forcibly hauled away.  Interacting with some of the street people who sometimes show up in various states of intoxication has been a challenge at times, but so far we have been able to handle things peaceably on our own without needing to call in the police.

Other parts of Asheville are being occupied also; the sidewalk beside the federal courthouse, Pritchard Park daily for the GA until the 10 pm curfew and Pack Park on Fridays so that the drum circle can do their usual thing.  That is a totally voluntary concession on the part of OA.  We are protesting the mega-banks, not drummers & their audiences.

Donations of all sorts continue to come in.  The local mass media is starting to pay more & more attention.  It seems that the media’s presentation of the Occupy movement is getting more positive, with less ridicule, and with more attention being focused on the issues that have forced us out here onto the streets.  Our movement has the nation’s attention and rapidly growing support.

We have made great progress but not without great struggles.   Now that the “outside threat” (of police intervention) that unites a group of people is no longer a unifying factor, internal strife has reared its ugly head.

There were some serious differences of opinion on how the negotiations with the City Staff were conducted.   Some people thought that it was improperly done because some of the conversations that the legal team held as part of the discussion with the City were held in private settings.   Some people thought that we wimped out by accepting the parking lot under the bridge as a base camp, thinking that we should have held firm and demanded that we be allowed to occupy Pritchard Park, which is right across the street from the front door of Bank of America & beside Wells Fargo.

I feel that subject should be a non-issue.   We already legally occupy Pritchard Park from 8 am until 10 pm anyway.   Also, there is no shelter from precipitation there.   And most importantly, why provoke a fight with the City Staff, who are already on our side because they realize that they are also part of the 99%?

As for the negotiations, I feel that one must speak to the necessary officials wherever & whenever one can gain access to them.   In my experience, busy executive type people don’t usually come to you, you have to go to them.

Let me be clear.  We were successful, in spite of any ill will & divisiveness that may have occurred in the process.   We are learning.  We are strong.  We are intelligent.  We are determined.  We are durable.  We are proving it daily.  We are the 99% and we will overcome!

In summary, Occupy Asheville is growing steadily both in numbers in the streets and in numbers behind the scenes.  The sleeping American populace is starting to wake up and notice that something is going on.  You can bet that the 1% is taking notice too.  I expect more opposition to come, in diverse ways.  That is why I shared the experience that our group is having with dissident opinions.  You can be prepared for similar situations in your area.