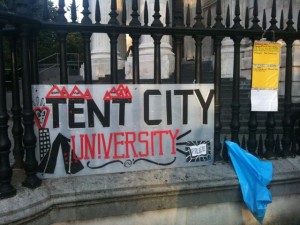 Last night [26.10.2011] I made my way to St Pauls. occupation in London, I felt it was important to show my support and be one of the numbers when I can. I wish that I could spend more time there but like most of the 99% I have other commitments and lend my thankfulness to those who make the numbers in the occupation on our behalf.

I went specifically on this night to hear a lecture from Doreen Massey as part of the occupations free education program. (For more infromation on the tent university see http://tentcityuniversity.occupylsx.org/?page_id=30 ); Massey, a seminal professor of geography has written extensively on the idea of space, how space is used, experienced, contested and thereby, and relevantly in this setting political. In her talk at the occupation Massey outlined the ways in which the financial sector has grown in dominance over the last thirty years. This, she explained really took off with the de-regulation of the stock market and increased privatisation of resources that occurred largely under a Thatcher government. Since this time there has been both Labour and Conservative government yet both have overseen a political policy direction of this nature. The road of privatisation and the influence of the financial sector now dominates all of the political life not only the UK but Europe, USA and most of the globe.

“The end of the socialist alternative, then, did not signify any renewal of democratic debate. Instead, it signified the reduction of democratic life to the management of local consequences of global economic necessity. The latter, in fact, was posited as a common condition which imposed the same solutions on both left and right. Consensus around these solutions became the supreme democratic value” (Rancière, 2004: 3–4).*

London is in many ways the centre of the migration of neoliberal ideology and policy into all walks of our life. How is it that we have money for banks yet not schools, it is because the idea that one simply cannot fail now has become normal in the everyday policy making of those that call themselves politicians. Firstly Massey’s talk eloquently outlined the ways in which the material practices of everyday human existence have become abstract from the forces that condition such actions. What do I mean, well simply put the speculation of financial markets on the trading of such things as the future price of coco that hasn’t even been grown yet seems very abstract to the point of ridiculousness. It is almost impossible to actually trace such a financial trade to a material happening of some coco growing and a famer harvesting it (Although some try, see; followthethings.com). However the effects of that trade are felt in very real ways through another abstraction that of value.

Value has many forms, economic, social, moral, cultural, emotional and so on. What occurs through an economic transaction is in the economic sense the difference in value between the farmers work and price paid for the coco is the surplus and this is abstracted, extracted and traded ,this is financial profit. However such an analysis alone largely ignores the other forms of value involved. There is a moral value involved in the nature of the production, further there is an emotional cultural and social value to such things as attachments to land, job security, and small locally owned businesses. These forms of value have been abstracted away from the material conditions of production so that the economic form is left. This process of abstraction happens at such a scale that a London based bank worker, the shopper, the company manger, the cook have no way of understanding the complexity of the ways in which material processes flow from one form of abstraction to another.

Ok so what about the occupation. Massey stated that “…the negotiation of space is an on-going social thing” and indeed St Pauls and the space around it has been radically transformed in the last two weeks. The battle over it is more than legal or practical and any view of ‘legal right’ positions the law as a stable category, when it itself is an abstraction and fixing of morals that work for certain people in certain ways at certain times. As Massey states “…we constitute space through our social relations…”. The question is then not what sort of space do we want, but what form of social relations do we want and how does such spaces engender or delimit social relations. The occupation has pulled on a different value that was always living in the realm of unmade potential in and around the city, the value of something else, of a different form of social relation, one that puts a value on the human experience of our economic systems on the ground. This is very much an Occupation, it is taking a space and radically transforming what it is, what is done there and asserting a value that has long been ignored by the privileging of neoliberal systems of finance.

It is through the highlighting of the abstractions that we can start to re-open this invaded imagination, to carve spaces for new ways of doing things. So how does this work on the ground. Well the 99% all have different solutions; however most want a library, a school, a hospital. Stating that we can’t have this without the banks is simply a privileging of one way of doing things over another. This way is one that for social, ecological moral reasons cannot continue in its current form. The occupy cause can seek out the material conditions of the privileging of the finance sector, the prominent ‘neoliberalism first’ ideas, at the local level manifest in the closed youth centre, the rise in student fees and so on. Action can be taken, we need not wait for politicians to fall into our way of thinking. Do what you can, write to your MP if you are unhappy, pester the newspaper, or if these things strike as petty drops in the ocean in the big changes we need to make, then come join us at the occupation. Be demanding, force open the imagination and take what it is we need. No longer can we see politics, finance, society, morals as separate things, they all work through the everyday materiality of all of us and as such we can re-configure the movement of value and the ways, in which we privilege one action over another to create a more equal future, equality upon which democracy depends.

*Quotations taken from Swyngedouw, E. (2009). The Antinomies of the Postpolitical City: In Search of a Democratic Politics of Environmental Production. International Journal of Urban and Regional Research, 33(3), 601-620.