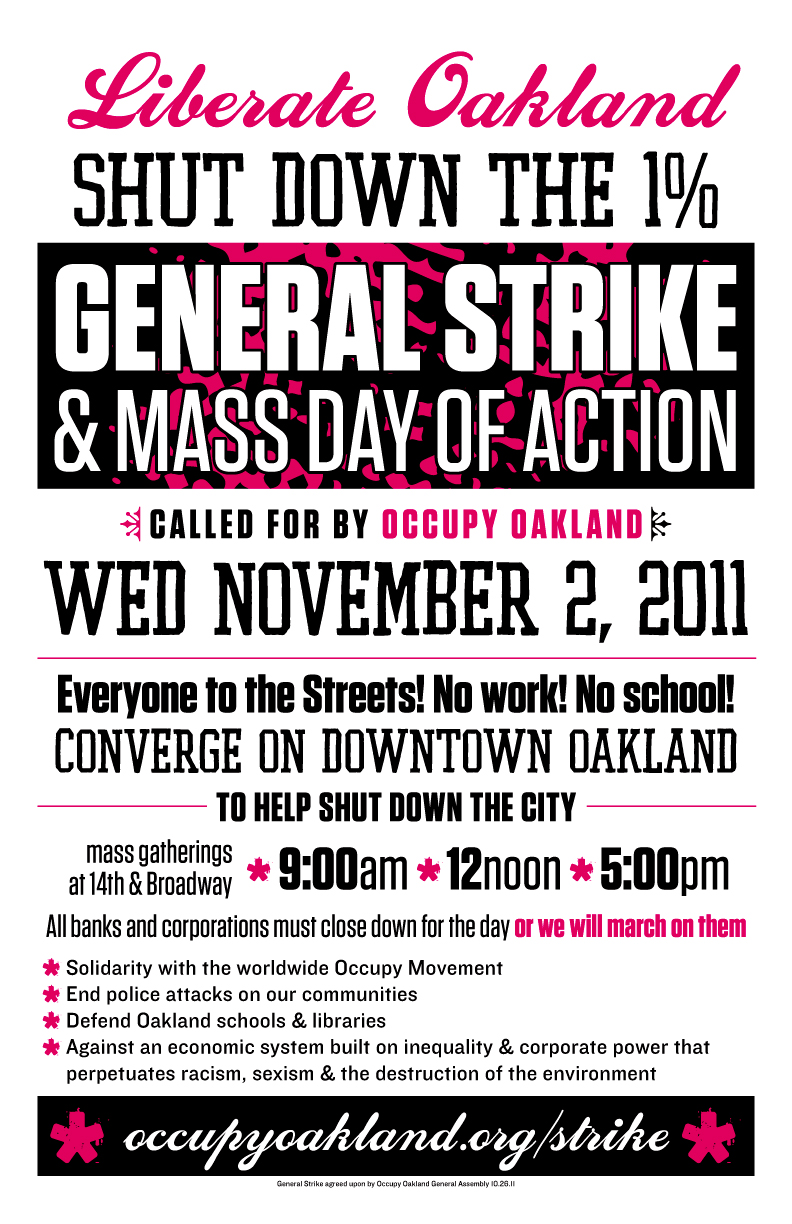 The Occupy movement here has arisen really fast and it´s getting stronger and stronger, from the 17Sept but specially since the 15O.
It reminds me very much the beginning of the 15M in Spain. Very similar ideas, structures, camps, and problems as well.
They are very happy because they feel that finally they´ve woken up, after a long capitalist sleeping. Claiming for the basic needs of the 99%, critizing the greed of the 1%. Horizontal movement, without hierarchies, no political parties, organized through assemblies and working groups.
By the way, they loved the Roll-up and the web How to camp, it was like a sweet for them, they´ve found it very useful.

At first, the US media ignored the Occupy movement, but now they talk about them every day –also at first the media called them “hippies” (here they don´t understand the word “perruflauta”;) and they used to critize the occupiers for not having candidates or leaders neither a specific list of demands. But now in the Congress some democrats are starting to reject the budget cuts in Education and the Health System, saying that “we are with the 99%”. And the occupiers have the support of the majority of the population in the US.

The 15O in the Bay:
Area was a success, the global movilization day and the Occupy Wall Street on the 17th of September helped many cities in US like San Francisco, Oakland and Berkeley to start organizing the protest and camp (Occupy SF started camping on the 25 September, in Oakland on the 10 October).
This Bay area is very symbolic, because it was here where the movements on the sixties started in US: the Free Speech Movement in UC Berkeley, the Black Panthers in Oakland, the feminist and gay movements. Now they want to use this strength to enhance the Occupy movement.
Here in US, even in the Bay Area, well known for its freedom and progressive ideas, it´s almost –or without–a tabu to talk about socialism, and even more comunism; but now many people are starting to criticize openly the capitalism and the american dream. I think it means a lot in this country.

However, here some Spanish like me feel confused because many people from US think that all this movement started with Occupy Wall Street…

As you know, last week (25 Oct) the police in Oakland threw the people out from the camp with a lot of violence. This Wednesday 2nd of November there will be a “General Strike & Day of Action” organized by Occupy Oakland. It will be supported, among others, by Occupy San Francisco, Occupy Berkeley and Occupy UC Berkeley. There´ll be a march to converge all these movements at 5pm in Oakland. At 7pm (Pacific time) there will be a general assembly in Oakland.

Hugs with revolution to everybody!
Sonia

All out in the Streets in Solidarity with Occupy Oakland

Early Tuesday morning 900 police from a dozen police agencies in the Bay Area, along with Homeland Security, brutally cracked down on demonstrators who marched in support of Occupy Oakland.
The demonstrators were marching to reestablish the Oakland occupation, which was shut down earlier in the day. At least one person was critically
injured, 24 year old Iraq war veteran, Scott Olsen, who was struck in the face with a projectile launched by police.

In response to the violent repression, which included the use of tear gas, guns that use incapacitating bean bags, batons and the arrests of over 85 protesters, the General Assembly of Occupy Oakland has called for a Mass Day of Action and a General Strike in Oakland to take place on Wednesday November 2nd.

We support Oakland’s call. In the wake of the violence used by the police in Oakland, also in Atlanta, Chicago, Denver,Boston, New York and elsewhere, we are asking students and community organizations, unions, anti-war groups, all progressive organizations and individuals across the country to take to the streets in solidarity. Defend Oakland! Defend all the occupations!

All Out Wednesday, November 2nd

We Shall Not be Moved