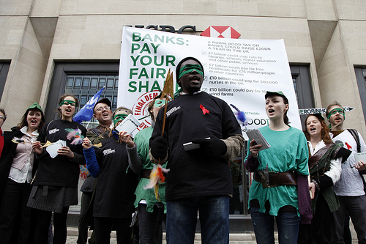 Marches occurred in dozens of cities around North America, with about 1,000 taking to the streets of San Francisco, in San Antonio, Las Vegas, Washington DC, Santa Fe, Denver, Liverpool, Edinburgh, Glasgow, Sydney, Amarillo, Salt Lake City, Berlin and other cities around the world.

In New York, dressed as the medieval hero who stole from the rich and gave to the poor, they called for a tax on financial speculation and for an extension of the state’s millionaire’s tax.

In Canada, activists with the movement took to the streets in Corner Brook, Halifax, Montreal, Toronto, Edmonton and Vancouver where roughly 300 demonstrators marched through the downtown core. Marchers called out for Prime Minister Stephen Harper to support the tax while meeting with other G20 leaders in France this week. While marshalling at the Vancouver Art Gallery beforehand, demonstrators were given a short history of the tax and then briefly debated its merits and possibilities. The idea of the tax as a possible demand from the Occupy movement was first by Vancouver’s Adbusters magazine, the same organization that proposed the Occupy Wall Street movement last summer.

What will David Cameron do next Thursday when he meets other world leaders? Will he sign the UK up to a Robin Hood Tax, to raise billions for the world’s poorest people and reduce reckless gambling by banks? Or will he try to block it? It looks like it could go either way.
So far David Cameron has opposed a Robin Hood Tax. But more and more governments are signing up – Cameron doesn’t want to look isolated on the international stage.
A big petition in the UK this week could tip the balance globally. Over 100 organisations, including 38 Degrees, Oxfam, Save the Children and the RSPB (who represents 354.000 workers around the country), are working together to deliver as many messages to David Cameron as possible.