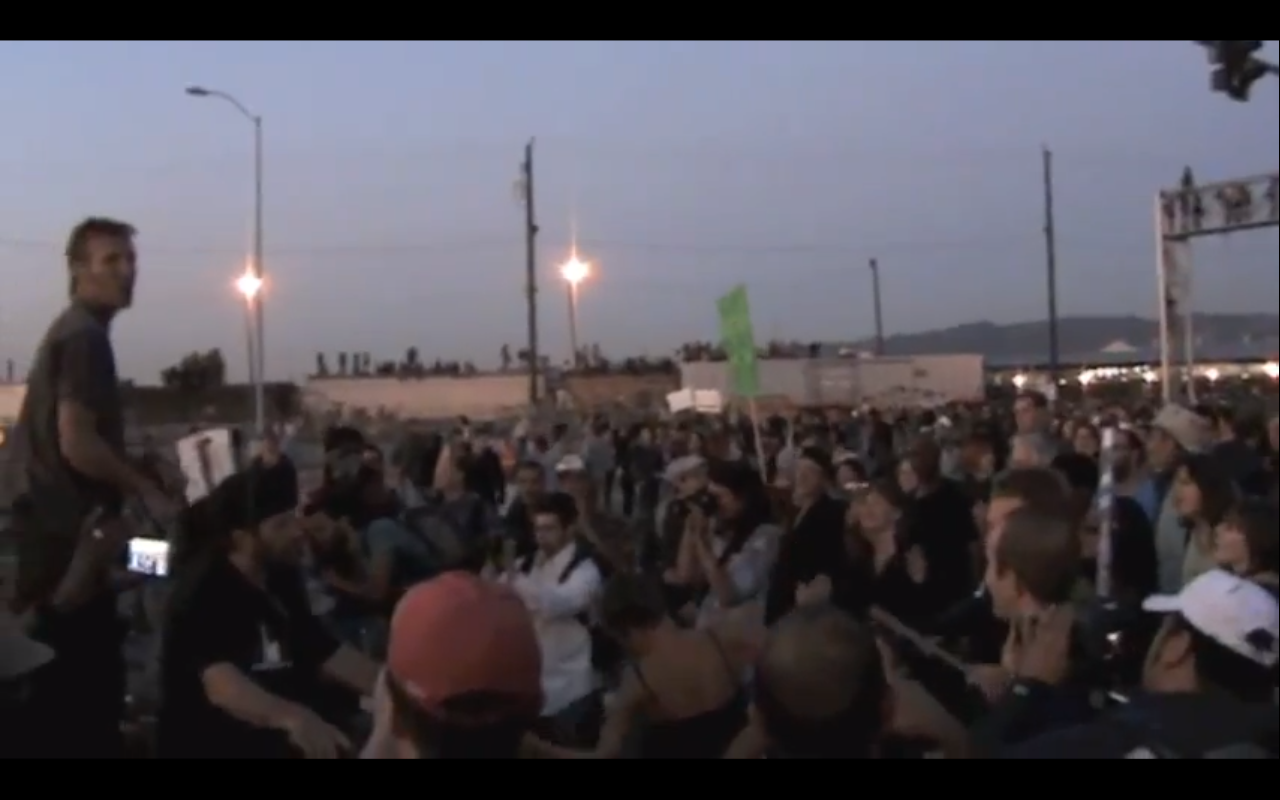 The General Strike on the 2nd of November called for by Occupy Oakland has succeeded.
Many businesses closed their doors in solidarity with Oakland, and the main banks like Wells Fargo, Citibank, Chase and Bank of America, and many others, shut down too. Oakland´s Port, the US´s fifth largest port also shut down.
Over 7.000 people joined the demonstration, according to the police, and 20.000 according to Occupy Oakland. During the day, there were three calls to join the strike, from 14th Street & Broadway: at 9.00, 12.00 and 17.00.
The other Occupy movements in the Bay Area, in San Francisco, Berkeley, and Berkeley University joined the strike in solidarity with Ocuppy Oakland.

A crowd of people united by a collective enthusiasm, joy, peaceful demanding, expressing themselves, talking to each other, smiling, singing, dancing, playing music, showing their personal poster, banners, flags…
What emotions were in the air?
Collective happiness, hope, openess, people´s eyes looking for the other´s eyes, and smiling, without words, complicity and common wisdom ideas.
Communication without words. It´s powerful, impressive –I felt– to get suddenly into this world.
People from all ages, colours, backgrounds, professions, all the differences united by the same aims, reasons, dreams. Live music on the stage, with people speaking about the reasons of the strike and the Occupy movement in between the songs. Community. Unity. Expressing the same, in different ways, from personal ways. Peace, relax, playful, humour, were together with the demands of the 99%.

Many references to the global revolution:
The clear awareness of the local demands, connected with the global movement, all over the world.
Criticisms against the greed of the 1%, claims for the dignity, the basic needs of the 99% (“Human need, not corporate greed”).
One American girl in her twenties, who is a lawyer, says to me: “You know, this is a big event here, we haven´t had this big demonstrations since the Seventies. And the last general strike in Oakland was in 1946…”.
Many criticisms against capitalism, demanding a new way to organize society, with more justice, equality, solidarity. Demanding a true democracy. “Grandmothers with Occupy”, kids claiming for their future, young people demanding a decent education, salary, job. Adult people holding their children hands, old people against the war, demanding good and sustainable health care.
The same claims of the 15M in Spain and the other Occupy movements in the world: People claiming their basic needs for the dignity of life, for all of the people.
They know they are together.
They know they are the 99 %.

At 5pm we started together the march from the Oscar Plaza to the Oakland Port, which was shut down since the morning.
The peaceful, joyful atmosphere continued during the way, crossing the lake.
Many people showing their support going out from their houses, from their cars, buses and so on.
We reached the port in the sunset, and the sky turned orange and pink melting with the music, open mic, banners and talks among the people, going together in the same way, with the same claims.

I left the port with this atmosphere around 8pm.

The next day I read in the newspapers about the violent acts that happened after midnight in Oakland: in the media they emphasize these actions, they used the words “vandals”, “chaos”, “clashes” and similar. They tell that a group of people broke the windows of some business, and banks. Also that they tried to occupy the “Travelers Aid Society” building in Oakland, a building that used to house the homeless people. The media tell that the police fired back with tear gas and bean gas to clear away the protesters, and that 80 were arrested.
I look at the selection of photos which goes with these reports of the general strike and I think that this selection draws a picture completely different than I and many people lived during the strike day. It reminds me the fallacy “to take the part as the whole” and when I comment this with an american neighbour, she said to me: “Don´t forget that the media belong to the big corporations…”.
Now I remember what one girl in the Oscar Grant Plaza was writing in a banner for the strike: “The Revolution will not be televised !!! Police brutality will”.

I also read a recent open letter released by the Oakland Police Officer´s Association, which shows the tensions between City Council and the police establishment: “We, too, are the 99%…As your police officers, we are confused…aren´t the Mayor and her Administration part of the establishment that are paying City employees to protest? Is it the City´s intention to have City employees on both sides of the skirmish line?”

All the protesters in the Oakland General Strike seem to feel sure about what will happen next: “This is the beginning”, “Occupy the future”, the movement will continue, here and all over the world.
And then one frequent sentence on the 15M in Spain came up suddenly to my mind: “De norte a sur, de este a oeste, la lucha sigue, cueste lo que cueste”. That was when all the “marchas indignadas” converged from the different cities in Spain to Madrid on the 23rd of July 2011.
And I think: Now the north, south, east, west, just became wider.

The four reasons for the Oakland General Strike, Wed November 2, 2011:

Liberate Oakland: “Shut down the 1%”

1. Solidarity with the worldwide Occupy Movement

2. End police attacks on our communities

4. Against an economic system built on inequality &corporate power that perpetuates racism, sexism & the destruction of the environment