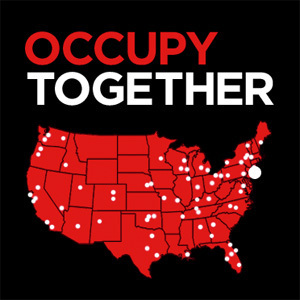 There has been some confusion over a recent ad campaign that was organized by a group of individual supporters of the Occupy Movement. A few weeks ago, David Sauvage independently produced a 30 second spot and posted it to YouTube. Sauvage and the others involved started a Loudsauce campaign on the same day in order to get funding for the ads to be aired nationally.

Loudsauce, similar to Kickstarter, is a crowd funding website where individual supporters can donate money to have ads they support aired on television. David reported on the Loudsauce site that his intentions were to “break through the media barrier and keep spreading the movement.” According to LoudSauce, when a campaign raises enough funds, they negotiate discounted media space with select partners who are interested in supporting their vision.

Occupy Together was emailed by David on October 10th with a link to a previous version of the video with OccupyWallSt.org at the end of the spot. Due to the large amount of emails we receive daily linking to videos, music, articles, etc. we were unable to respond to David’s question about our opinion to the linkage of the ad to OccupyTogether.org.

It was aired on Lawrence O’Donnell on October 14th which was the first time that we were made aware of the ad’s existence with the ad directing to our website at the end.

We have placed our name, identity, and the content of this website under a Creative Commons License, which allows others to share and remix these materials. While these ads did not use our logo, it did direct viewers to our site. We, the creators and volunteers at Occupy Together, had no input or affiliation prior to the airing of this spot.

Occupy Together is supportive of individuals stepping up and making contributions that support the movement. In fact, this is how Occupy Together began, by independently taking it upon ourselves to add whatever support we could which resulted in our small contribution to the movement. We believe in keeping our name and our materials open for public use because we feel that they belong to the movement and those people that support it.

The Loudsauce campaign for the TV spots recently reached its funding goal and negotiated ads to be aired over the weekend. We are in no position to tell ANYONE what to do with their money and if these individuals wanted to use their funds for these spots, that is their prerogative.

The confusion came when people began inquiring about “our” ads and questioning “our” funding and motives for these ads. To clarify, we never had anything to do with the production or funding of these ads, so the inquiries caught us off guard.

Occupy Together has no access to who contributed money for these ads or how much they cost to run because we were not involved in the organizing, production, or funding of this project in any way. Any questions regarding these spots should be directed towards the individuals who produced and promoted them or to Loudsauce. Again, we have no access to any of these records because we have not been involved in their creation.

Occupy Together has never solicited any donations or monetary contributions. Shortly after the launch of our site, we began experiencing massive amounts of traffic during the daytime hours which caused the servers to crash regularly due to inadequate bandwidth.  We had a private individual contribute towards our first $1000 of hosting in order to maintain a functional site to provide the information on the growing movement. We moved to MayFirst on a virtual dedicated server and pay a membership fee of $300 a month to belong to the co-operative hosting organization. Beyond this, our time and other expenses have been completely funded out of our own pockets.

From the beginning, as a team of volunteers, we decided that the work that we were doing through this site was more important than any one of us. Therefore, the anonymity of the team was not just to protect our privacy but to prevent any single individual from overshadowing the movement or to appear to be in any kind of “leadership” role. Because of this, we decided to go only by our first names and rely on our actions to speak for our intentions.

Transparency is important in this movement. We also understand the importance of individual freedoms and rights as well as consensus among the group’s members. As it stands, the Occupy Together team has agreed to continue to go by our first names only. If at some point in time new information comes to light or the feelings of the members change, we will reconsider this position.

Inevitably, there are going to be those who are quick to react and accuse those they suspect of having “ill intentions,” even if those suspected are working in the greater good of the cause. A certain level of skepticism is healthy and needed to protect the movement from being co-opted. However, it reaches a dangerous level when accusations are not based in reason or factual information. There is nothing to protect anyone from such accusations or insinuations and in many circumstances, no amount of evidence would prove contrary to someone else’s beliefs or baseless distrust. We would rather put our efforts towards working for the movement than spend our time defending ourselves. Instead, our plan is to continue to show our intentions through our actions and to maintain this level of transparency as we move forward.