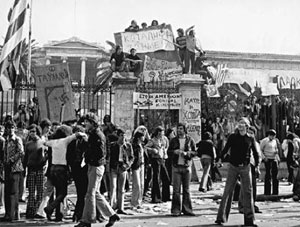 On the 17th of November every year all the Greeks but especially the students celebrate the students’ revolt against the colonels’ junta, having celebrations at schools and a march that starts at the Athens Technical University and ends in the American Embassy, in remembrance of the 17th November 1973.

On winter of 1972, the students started asking free elections for their councils in the universities and a friction with the colonels began.

On February 1973 the students gathered in the Athens Technical University campus but they were disbanded by the police. Later in the year the students helped by about 20000 people capture the building of the Athens University School of Law but they finally have to give up.

Finally on 14th November students from all the Athens area universities gather in the Athens Technical University campus and using its equipment they form a radio station, the only free media station of that time. They ask the colonels to resign so the country could have free elections and ask
everybody to help them in their effort.

About 100000 people are outside supporting the students when the colonels decide to disband the students by force.

This is a black page in the history of Greece. Greek soldiers fight against Greek students.

One tank advances and runs over the campus gate killing every student that was protesting behind.

So every year on that day we mourn, we honour, we praise the dead students but also we celebrate the beginning of the fall of the military junta which finally surrendered in July 1973.