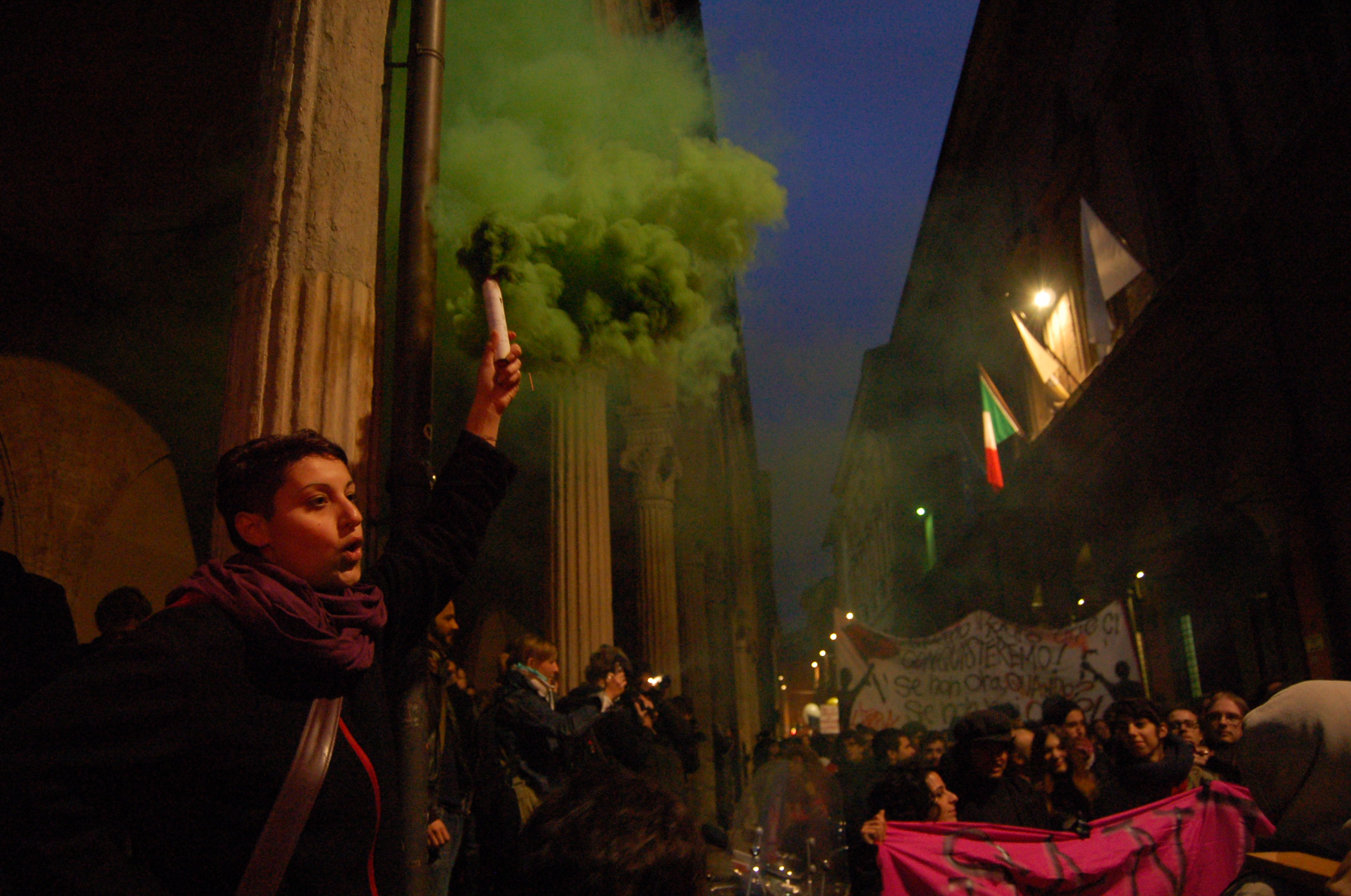 It has been an intense week in Italian politics. Long-time leader and ‘buffoon’ Silvio Berlusconi has been forced from power, new austerity measures passed and the occupy movement has begun to take hold. For on the 11th of November, as the parliament passed an EU imposed reform bill, thousands demonstrated across the country under the banner of ‘No austerity occupy everywhere’. In Bologna, a university city famous for political activism in the 1970s, three permanent occupations were established. The actions kicked off the night before, with a group of ‘indignati’ (indignant) occupying an abandoned warehouse in the centre of the city. The 11.11.11 started with a march by thousands of high school students, who had skipped class to demonstrate against the austerity bill. Students held signs reading “bail out schools, not the banks” and “occupy education”. Later in the afternoon hundreds participated in a ‘flash mob for change’. While at the same time another group began an occupation of the university, demanding free education for all. At around 7pm the ‘Procession of the Bankrupt Saint’ began. Thousands danced through the streets chanting “We won’t pay for the banker’s crisis”, stopping along the way at banks to put on satirical theatre performances. When the procession arrived at the main square, flares were set off and a human chain created around the entrance to an abandoned cinema. A small group of protestors entered the building first, checking for safety hazards and connecting the lights. When it was determined to be safe, an announcement was made over the loud speaker and all of the protesters poured into the building to begin the occupation. Crowds cheered as a banner which read “Occupy everywhere“ was erected at the entrance.

The newly occupied cinema is a massive building, with multiple levels, the ability to sit around 400 people and is situated right at the entrance to the city’s main square. It had been left abandoned for years and therefore was very dusty. Mops and brooms began to appear out of nowhere, as the occupiers began cleaning the space. The first general assembly was called at 10pm and hundreds of people attended. Working groups for communication, general logistics and political discussion were formed. One protester stated in a speech to the crowd “here we must create a space that is open, just and free. So like Occupy Wall Street, it can become a symbol for change that will spread across Italy and the world.” That night the warehouse occupation around the corner also had a general assembly, which planned a weekend of events, including talks, actions and music concerts in the newly occupied space. Earlier in the week Silvio Berlusconi lost his parliamentary majority and on the 12th of November he was forced to resign. Thousands flocked to main squares across Italy to celebrate the end this corrupt, sexist and generally horrible leader, who has left Italy’s economy on the brink of collapse. In Bologna one of the occupiers stated “it is a great start to get rid of Berlusconi, but we should remember that what he represents is not gone. Now we must begin to build a direct democracy.” A new ‘technical’ government (lead by technocrats) is currently being formed to pass another wave of austerity reforms, because no ‘normal’ government could or wants to do it.

On Sunday the 13th of November the occupations entered their third day. Protesters at the occupied cinema brought the building back to life, by showing films and documentaries. The warehouse occupation hosted a ‘family fun day’, with colouring in workshops and face painting for kids. Yet it also received a notice of eviction from the police, stating that they had 24 hours to leave the premises or face arrest. A general assembly was called at the warehouse occupation, where it was decided that they would try and resist eviction.

Over the last week political slogans and stencils, such as “we are the 99%” and “join the global revolution” have begun to appear all over the city. Toni, an Italian activist, stated that “here the occupy movement is organised and growing stronger all the time. I think that because of the violence on October 15th in Rome, people forget that they were some of the biggest occupy protests anywhere in the world, with over 200,000 demonstrators.” Since then there has been lots of debate within the occupy movement in Italy. It has gone back to the grassroots, holding assemblies, building support and planning actions. The occupiers in Bologna are working with other occupy/indignati groups across Italy. More protests are already planned throughout the country on the 17th of November, as the movement continues to grow .