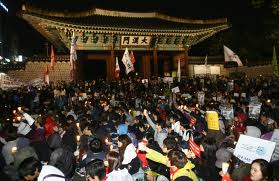 For the second Saturday in a row, hundreds of protesters gathered across Seoul to demand that the government stabilize housing prices and increase social welfare spending, The Korea Times reports.
The week prior, more than 600 citizens braved torrential rain to rally at Seoul Plaza as part of ‘Occupy Seoul.’ When police blockaded their entrance to the plaza, they instead held a candlelit protest across the street in front of Deoksu Palace. Protesters wearing masks held up banners reading, ‘Occupy Together’ and ‘Tax the Rich 1% – Welfare for the 99%.’ In Yeouido, Seoul’s main financial district, about 200 demonstrators reportedly rallied in front of the Financial Services Commission.
In addition to demanding changes to the financial system, South Korean protesters from labor groups have called for equal treatment of regular and non-regular workers, while students have demanded tuition cuts and more job opportunities, according to The Korea Times.

Protesters also have denounced the free trade agreement recently approved by the U.S. Congress. According to AsiaOne, the protesters stated that the pact “aims to burden South Korean workers with the economic crisis taking place in the United States.”
As the Korean people’s resistance intensifies, the voting of the Korean National Assembly has been delayed, which has embarrassed proponents of the FTA.  Meanwhile, the police enforcement against demonstrators has grown more violent.  They have aimed high-pressured water-cannons onto protesters, even causing the rupture of a protestor’s eardrums last Sunday.  More and more people are arrested during legitimate demonstrations.

Free Trade Agreements have a long history of mass protests.  The Korea-US FTA is no different.  Its official negotiation was kicked off in 2006 and signed five years ago in June 2007.  From the outset of the negotiations, thousands of people in both countries have opposed the deal.  One Korean labor union member took his own life in protest against the negotiations, and several hundreds of activists have been arrested during peaceful and legitimate demonstrations.  They know that the deal only benefits big corporations, not the people.  Nonetheless, the U.S. Congress approved the deal last month.  Now the ball is in the court of the Korean National Assembly.

This agreement is not just limited to trade; it also impacts policies governing public services, public health, environment and the rights of citizens.  Under the name of trade liberalization, the agreement is very likely to jeopardize democratic policies that promote economic justice, alleviate poverty, regulate financial services, and promote healthy communities.  Negotiated and signed before the financial crisis of 2008, the Korea-US FTA continues the dangerous trend of financial deregulation that allowed fat cats on Wall Street to wreck the global economy.  Now, Wall Street wants to export that mistake to Korea, and in turn to other countries through the Trans-Pacific Partnership Agreement currently being pursued by the Obama Administration.  As the U.S Trade Representative has said, the Korea-US FTA will become a model for trade agreements for the rest of the world.