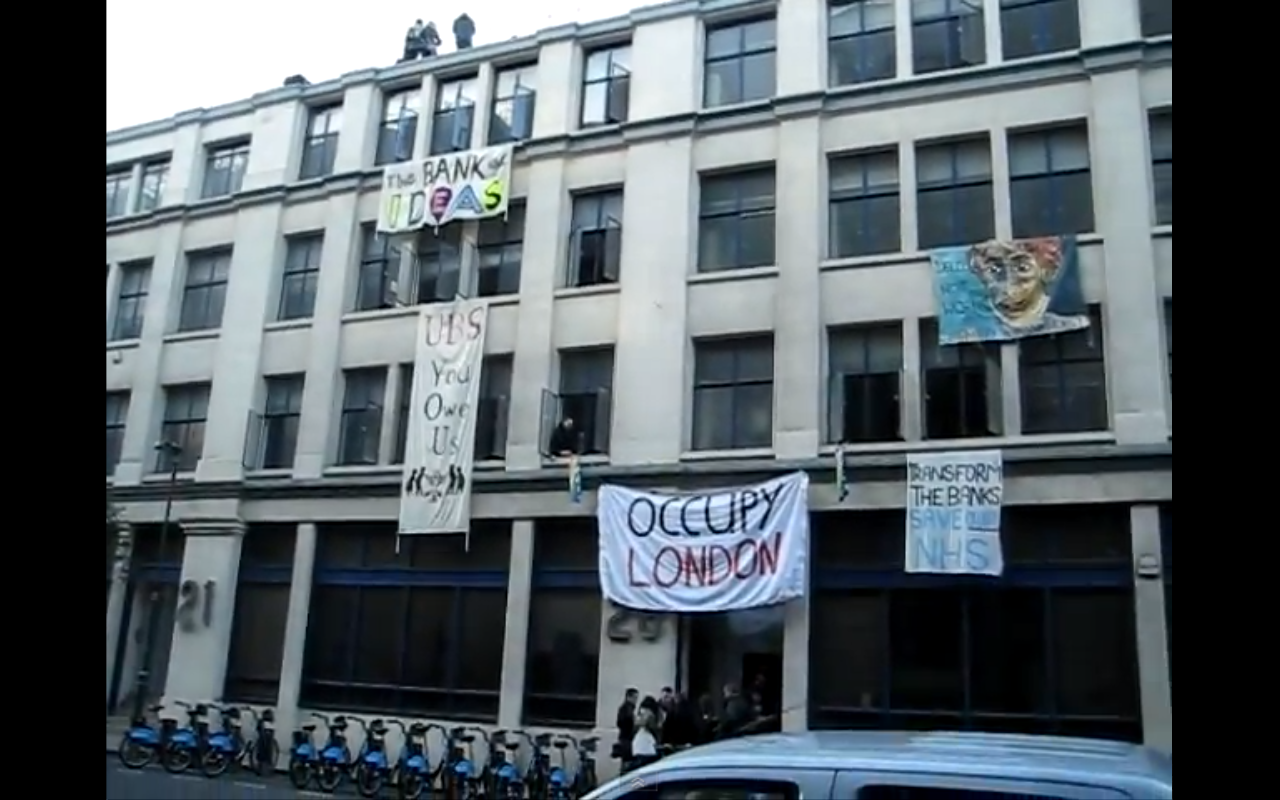 – First building for the economic justice campaigners as they occupy third space in borough of Hackney, alongside existing spaces in the City of London and borough of Islington
– New ‘Bank of Ideas’ open to public this Saturday. Spaces will be available for those that have lost their nurseries, community centres and youth clubs due to Government spending cuts

Occupy London has taken over a huge abandoned office block in the borough of Hackney belonging to the investment bank UBS in a move it describes as a ‘public repossession.’ [1]

Overnight on Thursday, a dozen activists from Occupy London, campaigning for social and economic justice as part of the global fight for real democracy, gained access to the building and secured it, giving them a legal claim on the space.

The multimillion pound complex, which has been empty for several years, is the group’s third space and its first building, adding to its two camps at St Paul’s Courtyard – near the London Stock Exchange in the heart of the City – and at Finsbury Square (borough of Islington).

Occupy London supporter Jack Holburn said: “Whilst over 9,000 families were kicked out of their homes in the last three months for failing to keep up mortgage payments – mostly due to the recession caused by the banks – UBS and others financial giants are sitting on massive abandoned properties.

“As banks repossess families’ homes, empty bank property needs to be repossessed by the public. Yesterday we learned that the Government has failed to create public value out of banking failure. We can do better. We hope this is the first in a wave of ‘public repossessions’ of property belonging to the companies that crashed the global economy.”

The Bank of Ideas

The group say the space will be reopened on Saturday morning as the ‘Bank of Ideas.’ [2] An events programme is being lined up, including talks from Palestinian activists, comedy from Josie Long and a session led by trader Alessio Rastani, who sent shockwaves through the media following a provocative interview on the Eurozone crisis. [3]

Sarah Layler of Occupy London added: “The Bank of Ideas is an educational space where people will be able to trade in ideas and creativity rather than cash. We will also make space available for those that have lost their nurseries, community centres and youth clubs to savage Government spending cuts.”

The Bank of Ideas is a non-residential occupation – so visitors are asked not to bring their sleeping bags. The space will be free from drugs and alcohol from the start, as per Occupy London’s safer space policy. [4]

[5] UBS Bank, which describes itself as a ‘premier global financial services firm offering wealth management, investment banking, asset management and business banking services’ was the subject of a $60bn bailout from the Swiss government in 2008 after piling up the biggest losses of any European lender from the global credit crisis. Since the time, the bank has cut thousands of jobs.

In September, a 31-year old trader at UBS was arrested by City of London police in connection with rogue trading that has cost the bank an estimated $2bn. The New York Times wrote an article in response called ‘At UBS, It’s the Culture That’s Rogue’ (see www.nytimes.com/2011/09/24/business/glo…? pagewanted=all)

The Financial Mail ran the headline ‘UBS grabs £1bn from pensioners’ with reference to a controversial form of secured lending that was sold aggressively to pensioners (see dl.dropbox.com/u/136370/bankofideas/ubs….)

The bank has nine offices in the UK including three in London.

A recent report showed a total of 9,200 homes in the UK were repossessed by banks in the third quarter of the year, a rise on the previous three months (see www.bbc.co.uk/news/business-15672123). Figures are expected to deteriorate further.

[7] On Sunday 16th October at an assembly of over 500 people on the steps of St Paul’s Cathedral, Occupy London collectively agreed the initial statement below. Please note, like all forms of direct democracy, the statement will always be a work in progress. Details at occupylsx.org/?page_id=575

[8] Bringing together a diverse range of people, Occupy London’s Stock Exchange, Finsbury Square (OccupyLFS) and Bank of Ideas are part of more than 30 occupations happening in towns and cities across the UK and over 1,000 actions worldwide coming together under the banner of “United For Global Change” calling for true democracy. Occupy London is supported by groups including UK Uncut, the London-based Assembly of the Spanish 15M movement and many others. It has already received phenomenal interest, from the public and media in the UK and around the world, with the OccupyLSX facebook group now more than 31,000 members.