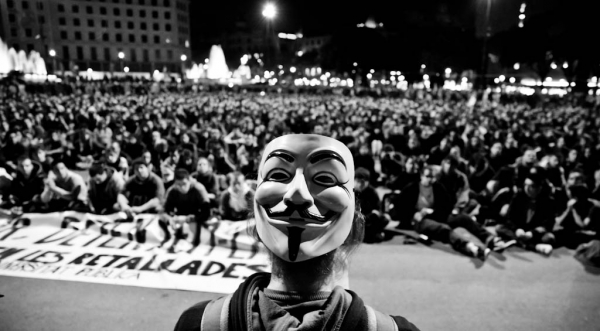 The new liberated space bloc17n, the old site to the Pompeu Fabra University in Barcelona, will house several evicted families. On November 17, the Catalan public universities strike was held to protest against budget cuts on education. The assemblies of a number of high schools joined the effort.

At 6:00 p.m., the student march began in the Philology College, located in Plaza Universitat. According to the organizers, some 30,000 people participated.

Nea 8:00 p.m., the march reached Plaça Catalunya, where an improvised assembly was held. The assembly decided to occupy the old site to the Pompeu Fabra University in the Duque de Medinaceli Plaza. After a few hours of meetings, the assembly decided to refurbish the newly occupied space as part housing for evicted families and part a People’s University.

This morning, there was a extremely tense moment when the local Police and the Fire Departments showed up at the building. The firemen made an initial report of the conditions of the building, and determined that there are no structural issues in bloc17n, aside from a specific problem with the building’s roofing. Finally, the two security forces left the site.

Around 1:30 p.m., the university occupiers held an assembly at the doors of bloc17n to introduce the project and form work groups.

The occupation release for this space can be read in full below.

On the other hand, and as part of this week of General Liberations, the Social Rights Assembly of the Right Side of L’Eixample (ADSE,) alongside other collectives and neighbors, proceeded to liberate an old venue where the bank Caixa de Sabadell used to be located after a march against evictions. The purpose of this action was to give the neighborhood a collective, self-managed space for the community.

In spite of the fact that the office had been closed for many years, the local Police proceeded to vacate the liberated space this morning at 8:30 a.m., failing to show a warrant of any kind. At that moment, nine comrades who were there at the time were identified and charged with “misappropriation of real estate,” yet another attempt to criminalize the 15M Movement.

After the removal, the entrances to the establishment were sealed to allow its “legitimate owner” to maintain the space empty and completely closed.

Rally to condemn the removal of people from the 16N building

Because of all this, the ADSE invites to a rally this afternoon at 6:00 p.m., at Consell de Cent Street and Sicília. Other assemblies in the neighborhood have joined the rally to move on to another protest which will take place this afternoon at 7:00 p.m. at Plaça Catalunya.

For public education. Saturday, November 19, at 5:00 p.m. in Plaza Universidad.

Following up on the rallies for education, the High School Students Assembly will occupy Plaza Universidad at 5:00 p.m. to protest in favor of high quality public education. After occupying classrooms at the IES Macià and Esteve Terrades schools, both in Cornellà de Llobregat, and after several actions and marches in others, such as the IES Montserrat de Sarrià and other schools in Sabadell, high school students have taken yet another step forward in the movement’s expansion. They are calling onto parents, teachers and other schools personnel to symbolically occupy the local squares and celebrate a high school Assembly. For more information, go to: assembleessecundaria.wordpress.com

Good evening to all.
Today, November 17, is is again a great day for citizens.
The student rally for a public university, against budget cuts and in defense of public education was a resounding success.
After the march, we held and assembly in Plaça Catalunya. Thousands of peoples attended and supported the vindication of public education. They were made aware of today and tomoprrow’s rallies and in favor of the vindication of public health.

Once the assembly ended, hundreds of people began a march around the old city all the way to the Duque de Medinaceli Square, where a new space was liberated. In this case, it is an old site to the Pompeu Fabra University.
After the liberation, a banner was displayed reading: “From indignation to action.”
The message was received with applause and much energy by those present.

At the assembly following the display, the use that will be given to the space began to be defined. It will become housing for evicted families and an educational site

Today’s action, upholds the liberation of spaces to utilize them as resource centers for the city and also to offer support to families. Thus, we are rejecting the wave of evictions going on at this moment.

Tomorrow, cleaning will begin, and an assembly will be convened at noon.

Today, Barcelona has a new liberated space for and by the people, and it will be self-managed.