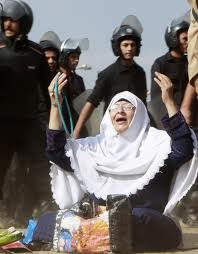 In Egypt, we are facing yet another January 28, now with both police and army attacking.
Protests have been violently attacked in Cairo, Alexandria and Suez. Tahrir square is under continuous attack since early Saturday with gas bombs, rubber bullets and live ammunition.
The attacks is still ongoing until now. Just now, Military intervened and attacked the field hospital. They now have started burning down the square and chasing protesters away.
Since early Saturday, we have at least five documented extra-judicial killings in Cairo and Alexandria and thousands others injured. These numbers are in addition to at least 4 other killings, that we just now received confirmation from a co-worker inside the square that their bodies are being collected in front of KFC. The killings are increasing by the minute–It appears that they want to wipe out all protesters – it is a full fledged massacre. Additionally, security forces are not only engaging in burning down public properties as they chase away protesters, they are also looting and damaging properties on purpose, something which is believed to be used against protesters later when they are arrested. There are reports of various arrests by Military police and quite possibly civilian police as well. The numbers are estimated to be very high, and amongst those arrested is potential presidential candidate and journalist Bosayna Kamel. There are reports that she was later released.
Additionally, there are various reports of arresting the injured from public hospitals. These are in addition to protesters who were arrested yesterday already and appeared today before Abdeen Prosecution (civilian prosecution) . There are reports that they will cut down internet and communication again, but we can not verify this.
In this context, it is important to mention that such violence is again used against pro democracy and human rights protesters, who are taking to the streets demanding the same exact demands . The majority of protesters do not belong to any political parties or affiliations and there is very limited.

Names of confirmed deaths in Tahrir Square, Cairo and Alexandria are:

1. Ahmed Mahmoud Ahmed
2. Shehab Eldin El Dakroury
3. Atef Mohamed Mohamed Awad (shot in the head)
4. Bahaa Al Senoussi, political activist (Alexandria: shot by live ammunition as he was participating in a peaceful protests in front of the Alexandria police station)
5. Hossam Hamdi Khaleefa (suffocation as a result of inhaling tear gas and head injury) documented cases of activists and journalists who have sustained eye and other serious injuries, in what might appear to be a policy of targeting journalists and activists for their work.

20 November: Tahrir Square: Video showing what appears to be a dead body of a protester being moved by Central Security Forces (CSF) and dumped next to the side walk following CSF and Military Police attack on protesters chasing them away from the square
http://www.youtube.com/watch?v=Fr2-VlldcuE&feature=youtu.be&a