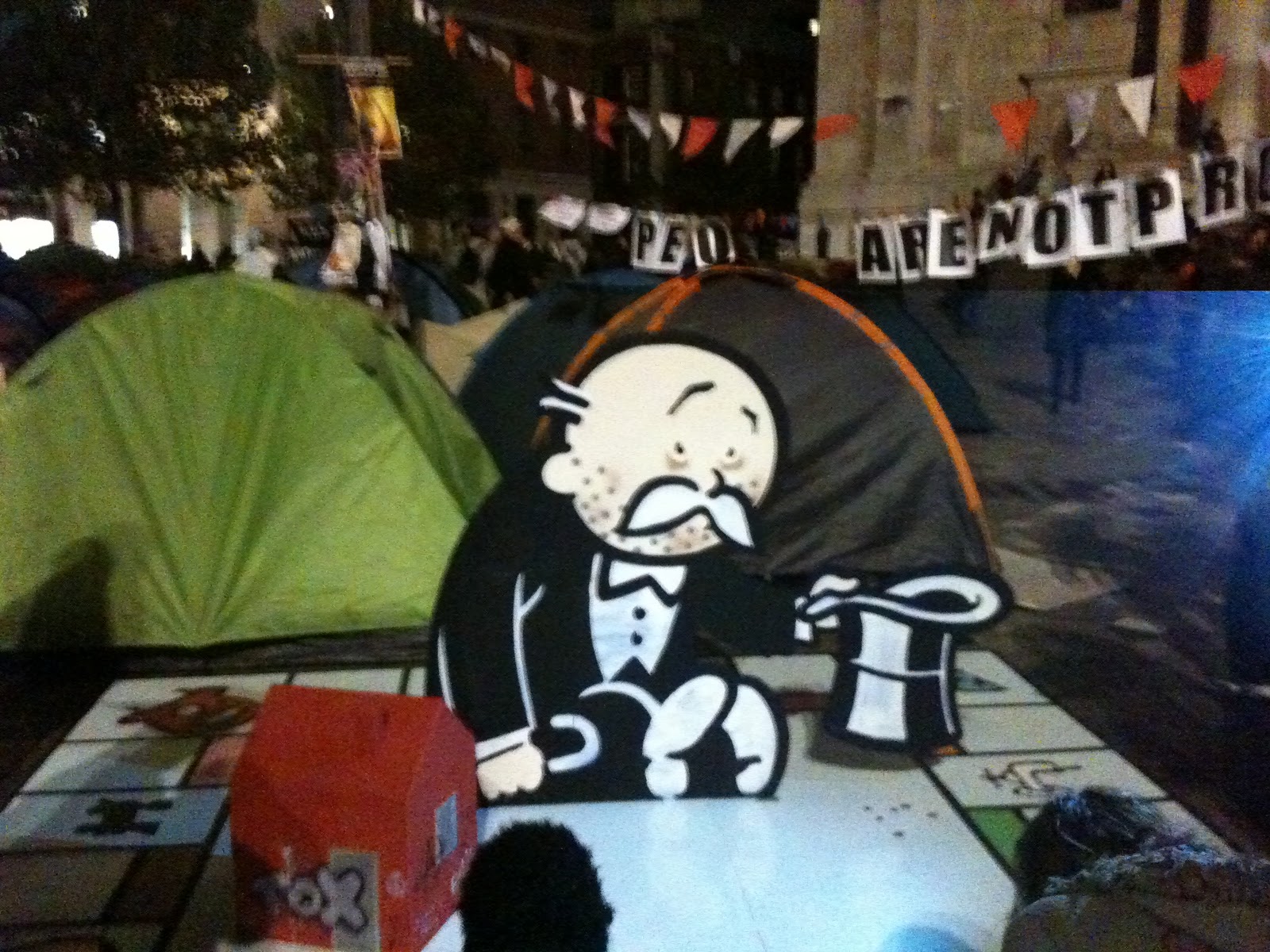 The Occupy movements around the world are reaching crunch time this week after it kicks off in New York and London was served with an eviction notice from The City of London Corporation.

Last week (4th), representatives from the Occupy LSX camp met with their opposite numbers from The City of London Corporation, at the corporation’s request (See SchNEWS 795). During this meeting it was proposed that as long as the camp was able to clear some space for Fire Brigade access they would be allowed to remain without legal persecution until after Christmas. The next day, as this proposal was going through consensus at the camp, the corporation added no less than 12 added extras, ranging from demanding that the camp recognised itself as unlawful, that it was trespassing and preventing freedom of movement for the public, and that the corporation had the right to sue for possession of the area – to name but a few. These extras were not announced to the press and kept as quiet as possible.

Occupy LSX rejected the terms, and responded with a few demands of their own. Demands that any other Local Authority in the country would be legally obliged to fulfil, but which The City of London Corporation remain scarily exempt from. Simply, the camp asked that the corporation:
1) Publish full, year-by-year breakdowns of the City Cash account, future and historic;
2) Make the entirety of its activities subject to the Freedom of Information Act; and
3) Detail all advocacy undertaken on behalf of the banking and finance industries, since the 2008 financial crash.

The Corporation doesn’t have to do any of this because it is in fact a medieval hangover (officially entitled The Mayor and Commonalty and Citizens of the City of London) which has gone unreformed for centuries – it’s a local authority whose electorate is composed almost entirely of businesses – it is a powerful advocate for the financial capital.

The occupation’s demands obviously caused some consternation amongst the lizard cabal, as dialogue was immediately halted, and the corporation issued eviction notices. Our feudal overlords sent their minions to the camp on Wednesday (16th) to post signs (and assault at least two tent dwellers, one of whom needed hospital treatment) demanding the removal of tents and structures from the area around St Pauls. Officials handed out notices embossed with the Corporation’s coat of arms showing two rampant dragons embracing a George Cross. The eviction notice doesn’t really have any force in law – it’s a notice of intention from the Corporation, setting a deadline before further legal action, and demanding the removal of all tents and structures from the so-called Red Land (no doubt a favoured basking ground). The deadline was set for 6pm on Thursday (17th).

In the lead up to zero hour the cathedral bells rang out into the night and the camp assembled to hear speeches from John Cooper QC, the movement’s
legal knowledge box, as well as occupiers and supporters.

As the clock struck 6pm, the collective raised their hands in a ‘silent scream’, a minute-long synchronised hand waving that symbolised er… well, make your own mind up. A banner proclaiming ‘ You Can’t Evict An Idea’ was unfurled and the message is resolutely one of defiance against the eviction order. As SchNEWS goes to press the atmosphere at tent city is according to the official spokesman “just so beautiful, so emotional” with people relaxing and music playing. There was at time of going to press no sign of any action taken to enforce the eviction. And the next steps? As the spokesman put it, “Of course we’re going to hold the space, why wouldn’t we?

We’re reasonable people making reasonable requests. This legal action by The City of London is just a distraction tactic. We want to have an open and honest dialogue about the issues we’ve raised and they’re refusing to do that. Until this dialogue happens, we will remain.”

IN THE BELLY OF THE BEAST

Across the pond, things in New York have come to a violent head. In the early hours of Tuesday (15th) morning, 1,000 riot cops stormed into New York’s tent city in Zuccotti Park, arresting hundreds of protesters, detaining journalists and levelling tents and structures. Elsewhere in the US police took pepper spray and batons to Occupy protests in Seattle, Dallas and Oakland, California. Apart from a hardcore few, displaced New York protesters sought refuge in churches and all-night restaurants, and at 5.30pm EST on Tuesday, people were allowed back into Zuccotti Park, on the condition that they didn’t erect any tents. A co-ordinated mass action had been planned for Thursday (17th) before the eviction, and on the two month anniversary of the movement, ex-campers, students and unions made it their mission to shut down the Wall Street trading floor.

Early on in the day, thousands assembled and broke through the barricades around Zuccotti Park to take back their space. Bloody clashes with police ensued as protesters faced riot cops, resulting in arrests and beatings while the crowd blockaded the roads into New York Stock Exchange. Reports have also been coming out of police stripping clothes from arrestees as they were dragged out of the demo. A student march gathered in Union Square, around 2 miles from the violence on Wall Street, and various blocks of Occupy demonstrators started to march towards the students. The roving demonstration spread out through Manhattan with blocs breaking through police lines in some places, being kettled in others, taking over the subway, and general giving it the anarchic big one. The cops have been seriously heavy handed with eyewitness reports of hundreds of people with head wounds, cuts, bruises and batterings from cops. As SchNEWS goes to press the protest is still in full swing, with tens of thousands occupying Brooklyn Bridge.

In Paris, Les Indignés camp at La Défense has also been facing the rough treatment from authorities. Set up on 4th November to coincide with the G20
summit in Cannes, the camp had been slow to grow to the same numbers of protesters seen in London and New York. Cops moved in on Tuesday (16th), apparently just to tidy up a bit – stating they were there to clear cardboard boxes and furniture that had been collected as part of the settlement, and not to evict the people. About 100 police officers and gendarmes raided the camp, confiscating the protesters’ tarpaulin, cardboard boxes and signs. Resolute demonstrators immediately set about rebuilding the camp and have pledged to stay.