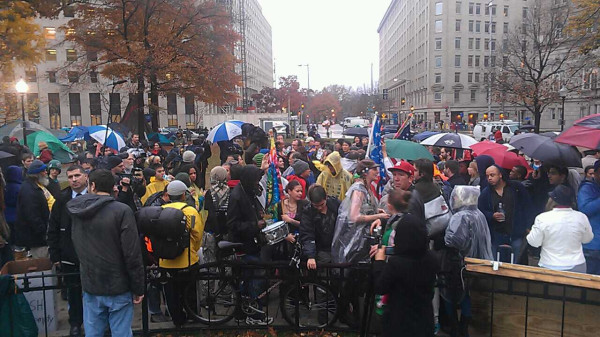 Exposes Failure of Undemocratic Super-Committee Attempt to Squeeze the 99%

Today an Occupy Wall Street initiative called ‘Occupy the Highway’ arrives in Washington DC, having marched from New York City. Two weeks ago, Occupy Wall Street participants in Manhattan embarked on the epic journey. Their goals were to make the new movement visible in more communities, to connect with other occupations along the way, and to further a national dialogue about how to reclaim our democracy.

Their journey was timed to coincide with the announcement of the so-called Super Committee; to bring a message to Congress to end corporate welfare and tax breaks for the rich and to stimulate the economy by rebuilding the country’s infrastructure and investing in education, clean-energy and public health; items that are supported by the vast majority of Americans in poll after poll.

“The so-called Super Committee was a failure from the beginning. It was an attempt to do something undemocratic. Thankfully it didn’t work,” said Michael Glazer, an organizer of Occupy the Highway. “No one has the courage to stand up inside our corrupt political system and fight for regular Americans. So, we will continue to take a stand outside the system.”

‘Occupy the Highway’ participants expect to arrive at McPherson Square at around 2:30pm today, where they will hold a General Assembly-style press conference. From there they will march to Freedom Plaza, and from there to the Capitol steps, where they will discuss the failure of the U.S. Government to be accountable to its people.

“Wall Street owns Washington. Our government is not representing the interests of the people,” said Ed Needham, a volunteer with Occupy Wall Street. “Congress is defending the big banks, big corporations and super-rich. This is why the Occupy Movement grows each day.”

Click here for more information about Occupy the Highway.