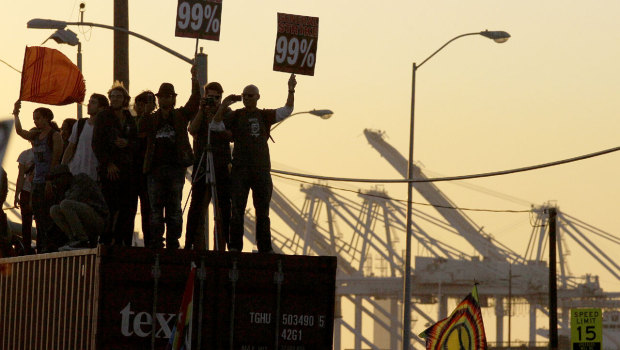 Proposal for a Coordinated West Coast Port Shutdown, Passed With Unanimous Consensus by vote of the Occupy Oakland General Assembly 11/18/2012:

In response to coordinated attacks on the occupations and attacks on workers across the nation:
Occupy Oakland calls for the blockade and disruption of the economic apparatus of the 1% with a coordinated shutdown of ports on the entire West Coast on December 12th.
The 1% has disrupted the lives of longshoremen and port truckers and the workers who create their wealth, just as coordinated nationwide police attacks have turned our cities into battlegrounds in an effort to disrupt our Occupy movement.
We call on each West Coast occupation to organize a mass mobilization to shut down its local port.  Our eyes are on the continued union-busting and attacks on organized labor, in particular the rupture of Longshoremen jurisdiction in Longview Washington by the EGT.
Already, Occupy Los Angeles has passed a resolution to carry out a port action on the Port Of Los Angeles on December 12th, to shut down SSA terminals, which are owned by Goldman Sachs.
Occupy Oakland expands this call to the entire West Coast, and calls for continuing solidarity with the Longshoremen in Longview Washington in their ongoing struggle against the EGT.
The EGT is an international grain exporter led by Bunge LTD, a company constituted of 1% bankers whose practices have ruined the lives of the working class all over the world, from Argentina to the West Coast of the US.
During the November 2nd General Strike, tens of thousands shutdown the Port Of Oakland as a warning shot to EGT to stop its attacks on Longview.
Since the EGT has disregarded this message, and continues to attack the Longshoremen at Longview, we will now shut down ports along the entire West Coast.
Participating occupations are asked to ensure that during the port shutdowns the local arbitrator rules in favor of longshoremen not crossing community picket lines in order to avoid recriminations against them.Should there be any retaliation against any workers as a result of their honoring pickets or supporting our port actions, additional solidarity actions should be prepared.In the event of police repression of any of the mobilizations, shutdown actions may be extended to multiple days.

In Solidarity and Struggle, Occupy Oakland