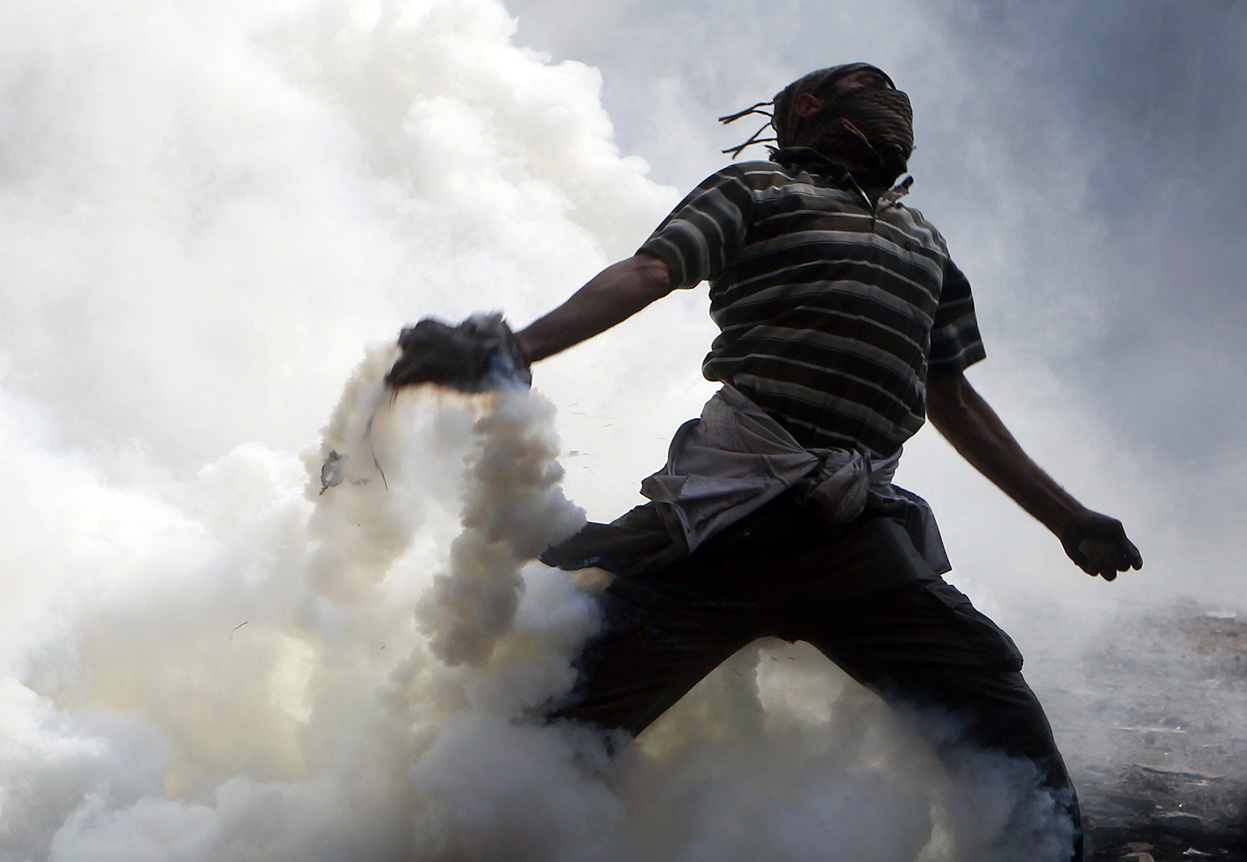 Dear friends,
I am since 4 days in the middle of shooting and nerve gas, here in Bab El Louq square, 5 minutes behind Tahrir square, close to the Ministry of Interior.
Right out of my window, I can see the fire of the guns and the gas cartouches and the motor cycles that take the injured out of the battle bringing them to the field hospitals, one after the other… hour by hour, day and night…There is shooting and this strange nerve gas all the time and at around 10:30 p.m. yesterday night the shebab were attacked for one hour by 30 unknown uniformed special forces in black with different live ammunition and gas, no street lightning at all, the scene only lit up by the fire of the guns, the dim light of the moon and some strange phosphoric light at the end of the street leading to the Ministry of Interior.
After an hour, they reconquered Bab El Louq square where I am living with nothing than stones and unbreakable determination and solidarity. Into the face of the shooting and the attacks onto their bare bodies, the shebab were shouting into the night “hurriya” (freedom) and “madaniya” (civil state)… not “ilsamiya” (islamic)…
In parallel, Tahrir square full with a millioniya (a million-man demonstration) was attacked at least twice during the night with a nerve gas which you cannot see or smell. I saw with my own eyes how people collapsed suddenly around me. As far as I understand, it’s not clear yet from where the gas was coming – from an airplane, the metro air condition below the square or thrown from above the roofs of the surrounding buildings. It’s war against the population, it’s incredible, it’s a crime. Me myself am full of gas and mentally and motorically slightly but continuously disoriented, respiration tract burning. I am deeply shocked. Whoever needs to understand: the Egyptian shebab will never give up, none of us will give up any more. This is about holding on to your remaining or may be first becoming a human being again.

Linked to this message a video of the Egyptian campaign “Occupy”, a call to all Egyptians and everyone who understands that this is not about Egypt alone, that this is about the fight of all of us for freedom and for a future for everyone in this world to substitute the logic of accumulation and theft and the oppression needed to enforce it, a call to join the open-ended demonstration and sit-in in front of the Egyptian embassies all over the world starting at 3 p.m. next Friday in your countries. The video is in Arabic and English, the middle part is English.

Try to follow the news on the non-mainstream media (facebook and blogs) and the news on Al Jazeera, for those who speak Arabic preferably the Arabic version.

Also for those who speak Arabic below the link to one of the most important TV programs in Egypt after the revolution, the sequal that was broadcasted before yesterday. In it, the hosting journalist Youssri Foda gives space to three of our injured comrades to speak as well as to the well known journalist Bilal Fadl. The dentist Ahmed Harara, the blogger and activist Malek Mustapha and the photographer Ahmed Abdel Fattah of the Egyptian daily al-masry al-youm all lost their eyes due to deliberate shooting from close distances with what we call khartouche ammunition, a projectile with between 13 and 16 small bullets of different sizes, made of either hardened plastic or metal. Fired at close distances it can be lethal and if targeted at eyes, the eyes are destroyed. Ahmed Harara is a close friend of mine. He lost his right eye during the first revolution on 28 January 2011 and 4 days ago he lost his left eye. He will be forever blind but he went back into Tahrir square, right after his operation in the hospital. In the TV program you will see the young officer who fired the bullet and you will hear the voice of a shooting officer proudly reporting to his superior that he managed to get another eye…it was a premeditated campaign… targeting the eyes of the activists. But their response is to go back to Tahrir square, the square of liberation, because a shot eye is better than a broken eye as Ahmed Harara says in the program. They are not blind and they put everyone in front of the necessity to take position, no more lies, no more evasion. This is expressed very bluntly by the journalist Bilal Fadl in the program. The program also gives a good concise context of the events during the past month leading up to this second Egyptian revolution