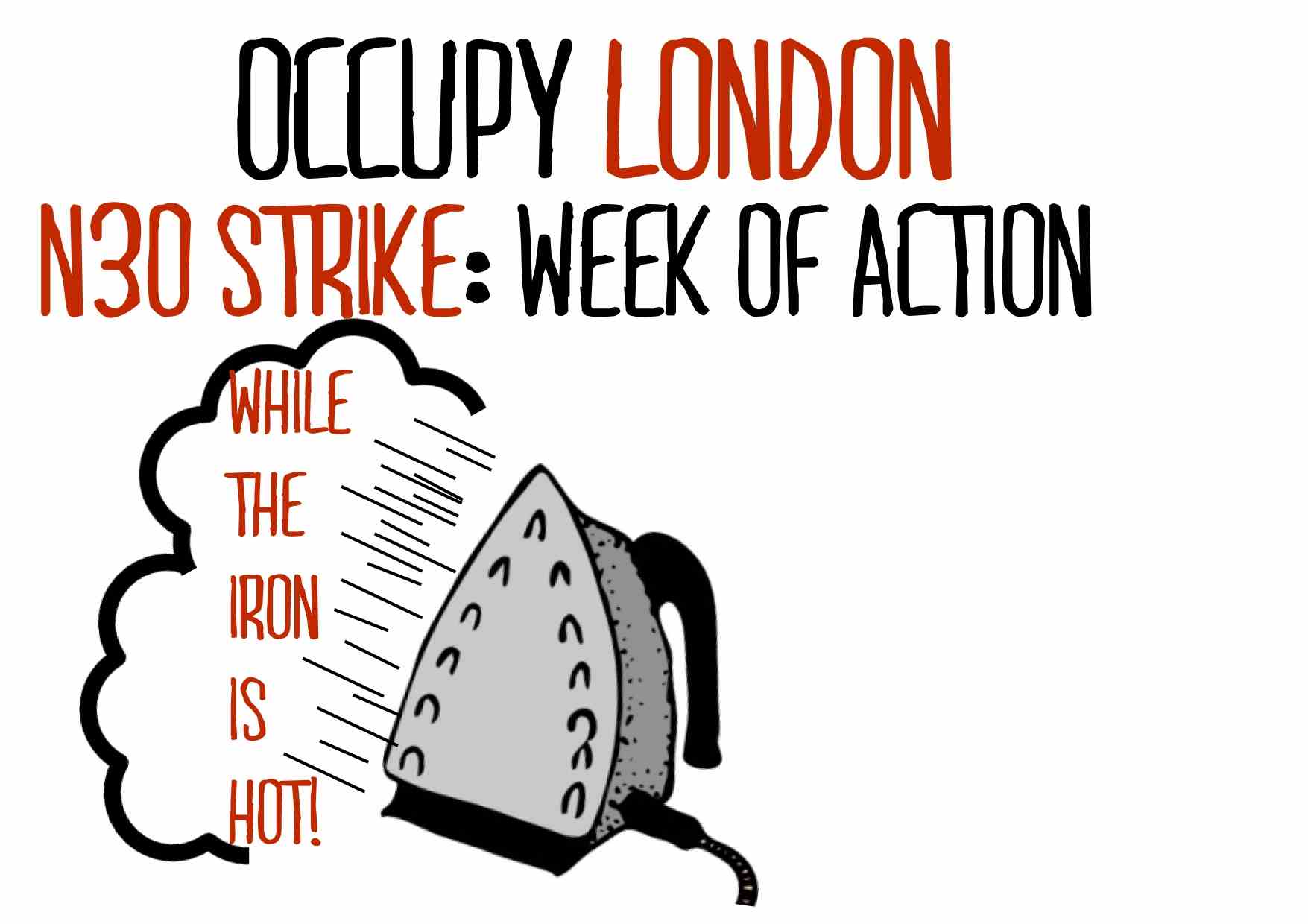 The largest strike action of a generation will take place on Wednesday 30th November. Occupy London wholeheartedly supports the strike by over 3 million workers fighting for their pensions and a better society.

The government is attacking the people with unjust, unequal and unneccesary austerity measures. The banks got bailed out, we got sold out. We stand with workers in opposing this government and this attack. The Treasury Committee of Parliament’s Independent Commission on Banking gave their final report this week at Westminster. They heard witnesses from executives of banks like RBS, HSBC, and Lloyds, and it’s their charge to examine the policy and investigate the actions of these banks regarding the crisis. We want to remind Parliament that their duty is to the people, not the banks — where is our bailout? What makes up a city, we ask — the Londoners or the landmarks?
The people of the UK will not stand for their government’s silence or their collusion with the financial industry. They will stand up on November 30th for the largest general strike in recent British history. See you there!

In the week before the strike, we will be holding and supporting a number of actions and events. The principal aim of this week is to join students, unions and retired in collaborative actions. The N30 we organize a big collective action in the morning, after this massive “blockade” we will support the different marches all day long in solidarity with all the outraged workers and we invite everybody to join the first “General Assembly of London” at the end of the day to unite the 99% and decide all together how we continue the fight.

Support the strike, reclaim our future. Wednesday 23 November
At 10.30am, students, workers and residents from across Bloomsbury occupied a disused University property. From today, 53 Gordon Square will be renamed the “Bloomsbury Social Centre. The building has been empty for three years, subject to a legal dispute over its ownership. London.indymedia Early in the morning, direct action dropped a banner in several points of the city. OccupyLondon

Thursday 24 November
GoldSmiths SOAS university is occupied since this morning by the students supported by OccupyLondon. OccupyLondon joined the London Cleaners fighting for a London Living Wage for the second time this month. OccupyLondon organized a demonstration for the “Women day of action” in St. Paul

3-5pm – Bank of Ideas – Why are the strikes important and what can we do to support them? Justin Baidoo
http://bit.ly/rZfOc6

Police propaganda march – march past police stations calling for police to take the day off on Wednesday.