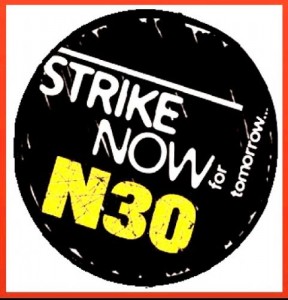 EPSU calls for a European coordinated mobilisation (24 November 2011) The Executive Committee of the European Federation of Public Service Unions (EPSU) discussed the grave economic and social situation in Europe at its meeting 9 November 2011.
Public services and public service workers are under pressure in almost all European countries with austerity measures affecting EPSU members directly.
Collective bargaining, the autonomy of the social partners and social dialogue are under attack in many countries in the Euro-zone, in the EU and in other European countries. Therefore the Executive decided to call its affiliates to mobilise across the European continent during the week of November 30th.

On that day many trade unions from different countries will strike, demonstrate, picket, leaflet and publicise the struggle and demands of public sector workers of Europe.
The call has made to coincide with the British public sector all-out strike and with the 15th Greek General strike. But it also coincides with a week of mobilisation against austerity and privatisation in Italy and with a campaign of mobilisation in Portugal that has seen more than 200.000 public sector workers demonstrate on November 12th and the second General Strike on November 24th in a year.

The country’s private trade union federation said last week that it has called a 24-hour strike on Thursday December 1 to protest against the draft 2012 austerity budget. The first major strike since a national unity government took over, it signals that labour unions will not soften their stance against austerity policies under the new coalition.

The 2012 budged is scheduled to be approved by parliament on December 7. Passing the 2012 austerity budget is one of the conditions for receiving a 130bn euro bailout from the country’s international lenders.
Public sector trade union ADEDY, which represents about 500,000 state employees, will decide later on Tuesday if it will join the walkout.
The 2012 budget includes a series of tax increases and spending cuts to ensure the budget deficit falls to at least 6.7 percent of GDP next year from 9 percent in 2011. Pasok and New Democracy said they will back the budget.

(If we don’t manage to have livestreaming from our own you can check zougla.gr and stopcartel.net)