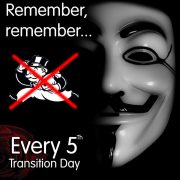 One of the tactics the 99 Percenters are using to take back the country from the 1 percent is to move their money from big banks to credit unions, community banks, and other smaller financial unions that aren’t gambling with our nation’s future.

Now, the Credit Union National Association (CUNA) reports that a whopping 650,000 Americans have joined credit unions since Sept. 29 — the date that Bank of America announced it would start charging a $5 monthly debit fee, a move it backed down on this week.

To put that in perspective, there were only 600,000 new members for credit unions in all of 2010. “These results indicate that consumers are clearly making a smarter choice by moving to credit unions where, on average, they will save about $70 a year in fewer or no fees, lower rates on loans and higher return on savings,” said CUNA President Bill Cheney.
http://www.truth-out.org/650000-americans-joined-credit-unions-last-month-more-all-2010-combined/1320412458

Goldman had already demanded the return of its $5,000 payment to the Lower East Side Peoples Federal Credit Union.  Now, sources say, the trillion-dollar Wall Street mega-bank sent the following message to the not-for-profit community bank:  ”You will never get a dime from any bank ever again.”
http://www.moneytrendsresearch.com/goldman-sachs-threatens-small-community-bank-for-banking-with-ows-protestors/

The spirit behind “Bank Transfer Day” caught fire with the Occupy Wall Street protests around the country and had more than 79,000 supporters on its Facebook page as of Friday. The movement has already helped beat back Bank of America’s plan to start charging a $5 debit card fee.

Because credit unions and community banks vary so greatly in size, however, it’s hard to gauge the total scope of the defections they’re reporting. For example, the Lower East Side People’s Federal Credit Union in New York City says it’s enjoying more than 55 new account openings a week. That’s a big jump from its average of about 10 new accounts per week, but insignificant when weighed against the portfolios of the nation’s largest banks.
http://m.apnews.com/ap/db_16026/contentdetail.htm?contentguid=yTApK5bS