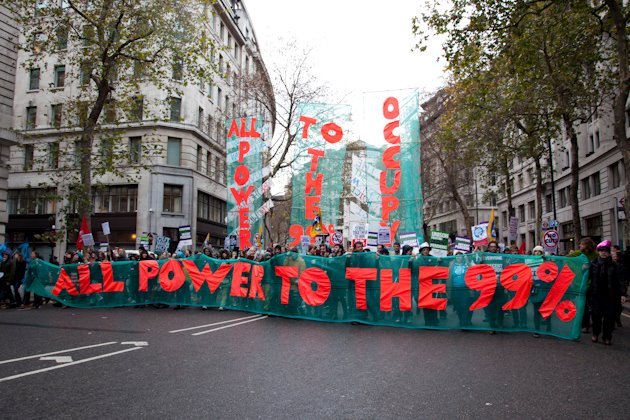 On Wednesday 30 November, Occupy London – part of the global movement for social and economic justice – sent a message to Mick Davis, CEO of Xstrata: As the highest paid director of any FTSE 100 company, we will not let your outrageous income go unnoticed. [1]

We had to take a stand. These executives hide in their offices, and as they hoard capital they face no scrutiny for their actions. With our peaceful action, we wanted to remind the highest paid that they cannot continue to ignore this economic climate without repercussions.

Later in the day Xstrata’s PR firm went on to correct our statement, arguing that CEO Mick Davis took home £17.7m, as opposed to the £18,4m that Occupy London stated as identified by employment research organisation Incomes Data Services (IDS). [1] Needless to say it makes no difference, considering that in 2009, the worst year of the recession, Mr Davies took home a staggering £27m, including basic pay, bonus and share options, according to the company’s annual report.

Those on the roof, as well as several others within the building and outside were arrested during and after this action. Photographs from the roof of Xstrata’s offices have begun to emerge today and they show scenes of police force used on peaceful demonstrators. *

Moreover, those arrested after the action were engaged in nonviolent resistance, trying to prevent their friends from being taken away in a coach hired to the Metropolitan Police by Edward Thomas & Son. [3]

Occupy London is not convinced that the “clashes” and “violent scuffles” with police referred to by ITN News and others capture the character of what actually happened.

This is part of a disturbing pattern of police action during the day which sees people being warned away from exercising their right to protest – implying violence may take place – while official bodies sanction actions that, at the very least, may serve to exacerbate tense situations.

The day began with Occupy London supporters gathering at Liverpool Street at 7am to unfurl a banner in the station in support of the N30 strikers.

The crowd grew, as led by a samba band, it made its way through the City with its large “All power to the 99%” banner, eventually meeting with the electricians union, the sparks, just south of Southwark Bridge to show solidarity. Police maintained a respectful presence, until the sparks and Occupy London met and it looked as if kettling was about to come into force.

Occupy London and the sparks were peaceful throughout.

As the sparks and Occupy London set off to visit other pickets, news began filtering in that there were incidents happening at Occupy London’s Bank of Ideas building (a multi-million pound abandoned UBS office complex taken over by Occupy London in an act of public repossession) at 29 Sun Street.

A number of Occupy London left to find out what was happening only to hear that a Section 60 Order had been put in place covering Bank of Ideas and Occupy London’s second space, Finsbury Square. There was a significant police presence, with those leaving and entering both spaces being stopped and searched. Items such as phones were kept by police and several arrests were made.

According to the guidance on stop and search given on the Metropolitan Police’s own website:

“Section 60 Criminal Justice and Public Order Act 1994, gives police the right to search people in a defined area at a specific time when they  believe, with good reason, that: there is the possibility of serious  violence; or that a person is carrying a dangerous object or offensive weapon; or that an incident involving serious violence has taken place  and a dangerous instrument or offensive weapon used in the incident is being carried in the locality. This law has to be authorised by a senior officer and is used mainly to tackle football hooliganism and gang fights.” [4]

We leave it to those reading this to judge whether this was an appropriate use of Section 60 powers.

At around this time, details of a letter being given out to protesters for N30 were handed to a member of our press team. [5] This was similar to the letter that was given to student protesters in advance of their demonstrations 9th November, a move we described at the time as “an attempt to produce a chilling effect on the right to protest.” [6]

Gathering from 11am at the Occupy London Stock Exchange site, just by St Paul’s Cathedral, a large crowd of around 400 people left with several large towers draped in banners.

They joined the main march, with their sound system. The atmosphere was great, even though the march was essentially a long, slow-moving kettle flanked by police, with police dogs at times along the route. It has been noted by several media outlets, that compared to other groups on the march, there was a greater police presence around the Occupy London supporters.

Around 4pm, over 300 people including supporters of Occupy London from the TUC march, assembled at Piccadilly Circus.  Led by a flare and a band, supporters of the cause gained entry into the unguarded, unlocked offices of Xstrata in Panton House. Over 40 people made it up the open stairwell to the 4th floor, where Davies’ office is located. Some ran further up to the roof of the building where they dropped a banner reading ‘All Power to the 99%’.

Police then stormed into the building and violently removed the protesters. Officers, including Territorial Support Group squads (riot police), pushed those who were in the building down the stairs and arrested those who had reached the roof using excessive force. Later the police formed a kettle outside Panton House, which escalated the situation significantly.

Consequently, over 20 people were arrested.

As has been reported in The Independent this morning, there was a substantial undercover police presence throughout the day, some of whom were recognised from the student protests earlier in the month. [7] Occupy London questions the effectiveness of deploying widely-recognised undercover policemen in any intelligence gathering operation: far from operating incognito, they actually draw quite a lot of attention to themselves. What exactly, then, is their role? In light of recent cases where standards of practice for non-uniformed officers has been shown to be less than optimal, we feel that this is an area in which the Met could usefully provide some guidance.

In addition to undercover or plain clothes officers, forward intelligence officers with video cameras where a constant presence. The limited access individuals have to see what records are held on them in police databases in this country is an area of concern for all who value their rights of assembly and democratic participation. [8]

Finally, we wish to draw attention to the refusal of police to explain where those arrested – one of whom was a minor – had been taken. The real-world ramifications of not releasing this information to either friends or legal observers are serious, causing considerable distress.

We recognise that ordinary policemen and women are part of the 99%, but we are becoming increasingly concerned at the directions they operate under in relation to protest.

On Saturday 10th December, there will be a defendants’ meeting at 3pm at the Bank of Ideas on Sun Street in Hackney. We invite all those arrested to attend. Arrestees are also asked to contact Green and Black Cross, who have been providing Occupy London with legal support for demonstrations. Their contact details are: email GBCLegal@riseup.net or call 07946 541511.

* Edited as Occupy supporters quite rightly pointed out on Twitter and internally that the line “Photographs from the roof of Xstrata’s offices have begun to emerge today and they show scenes of police force which fortunately are not usual in this country” could be confusing as those who have been on demonstrations in the last year or more will have seen similar violence instigated by police fairly frequently.

[8] Guardian – Are you a ‘domestic extremist’ – http://www.guardian.co.uk/uk/2011/apr/11/domestic-extremist-police-databases