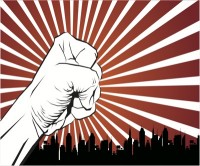 Every day the trade unions, students, and retirees are more and more mobilized for transnational coordinated strikes against the budget cuts and financial dictatorships.
In Europe and the United States, millions of people are taking to the streets to defend public services and denounce the lack of democracy and austerity plans.

There were 1.000.000 in Athens on October 19 and other general strikes on November 10 and December 1. On the 28th/29th of July the people’s assembly called for a massive general strike without the unions for the first time. The same occurred in Barcelona the 29 of September. Two months ago trade unions in Portugal called a small strike for the public sector, but on October 15, an assembly of 6000 people voted for general strike. The unions consequently changed their mind and decided to call for a general strike.

There were student actions in the UK on November 9th and 23rd, including occupations in collaboration with OccupyLondon. A major public sector strike took place on 30.11.11. with 2.000.000 people taking the streets. This was supported by OccupyLondon and also by European unions outside of the border.

How can the global movement of peaceful revolutions collaborate and inspire this general indignation?

We opened the debate in the IX Squares Meeting where we spoke about our local situations (problems/forces) and shared our first ideas about concept, content, duration, date, logistic etc.
We concluded that general strikes should play a pivotal role in the transition to a new way of living, if we want to reform the institutions or build our own ones. We need the skilled qualified people to work on it. So we have to meet them in their institutions (schools, hospitals, factories…) within common actions, debates and flier-posting. Inviting them to join our working groups and alternative projects.

We can invite all the squares/assemblies to work on these alternatives, sharing knowledge on a global platform. We should link as many local projects, unions and workers with the aim to mobilize for transnational general strikes.

If we want to create a new world soon, we need to activate alternatives right now.
The call can include work on these alternatives and every body can begin to collaborate on it in this PAD.
All the discussion

We propose to continue the discussion this Friday December 9 at 7 p.m (Spanish time) on webchat.freenode.net in the channel #takethesquare.
London’s working group for the March 25 Pan-European Strike, OWS media and US labor support outreach group will be presents and we hope a maximum of collaboration for this second meeting on this crucial topic.
We will make use of this meeting to join our contacts, exchange about our local situations, put in common the information creating dedicated global platforms on this topic and start an international project of global
strike with the first objective to invite a maximum of cities to create local committees working on it.
The goal of this meeting will be the creation of tools and platforms to connect the different groups who already work or will work on it and write a first call collectively.