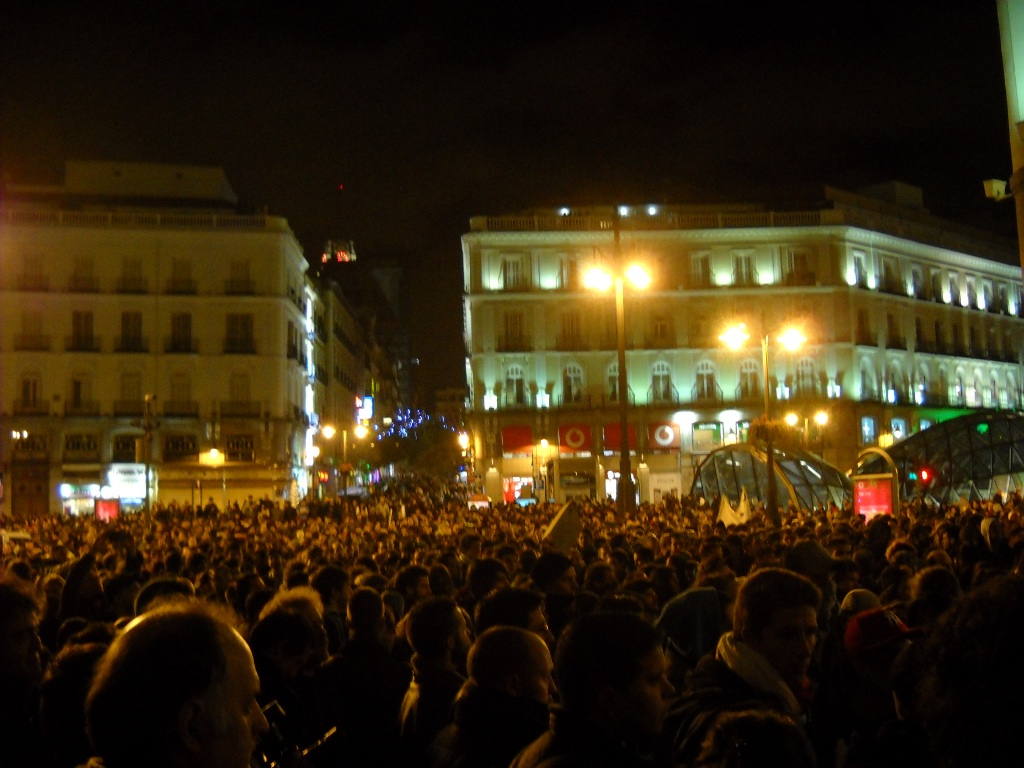 Today, after fifty days of occupation by the Housing commission of the 15M, the Hotel Madrid was evacuated by police. It happened at seven o’ clock in the morning.

Police were well informed about the situation they would find inside. They knew that most of the families had already been relocated in other squats. About a hundred people were present in the building. They were awoken rudely, they didn’t get the chance to gather their belongings. Elderly and children were present as well. They were treated a bit more kindly than the rest.

About ten people were taken into custody for not possessing certain documents. At the end of the day everyone was free again. The eviction took less than two hours. Police didn’t bother to remove the banners and the manifesto’s from the façade. They simply had the entrances closed by brick walls.

Immediately after the eviction a demonstration was called for in Puerta del Sol at eight o’ clock in the evening. Finally. These last few days Madrid seemed a city like any other, packed with happy Christmas shoppers. It was disgusting.

But this time, between the Christmas public, I witnessed the return of the lecheras, the police vans. There were about two dozen of them around the square. It was a wonderful sight. I missed it. Something was bound to happen.

Indeed, something did happen. At eight o’ clock there were a couple of hundred people protesting. They would swell to a couple of thousand, but they wouldn’t fill the square. Police had blocked the street leading up to the hotel. Protesters gathered in front of them and sang their tunes. Unfortunately, many people directed their rage directly at the police and not at real estate tycoon Carlos Monteverde Mesa, the owner of the hotel (among many other buildings in Madrid, Barcelona, Valencia, Bilbao, Paris and London), who happens to be a good friend of the governing Popular Party. Check out here.

After a while the crowd turned its back on the police and started moving. We followed the itinerary that we have walked various times this summer when Sol was occupied by police. Callao, Gran Vía, Cibeles, Neptuno, Atocha, and back to Jacinto Benavente, where the street leading the Hotel Madrid was blocked by police from the other side.

“One eviction! Another occupation!” was sung over and over again, and along the way the crowd made a half hearted attempt to break down the door of another abandoned building in Calle Atocha. At the end, people sat down in front of the police line for a couple of minutes, they held a moment of silence for the Hotel, and soon after that the crowd dispersed.

So, the Hotel Madrid is history. But was it a good history? Opinions differ on the subject. Most people share the noble cause it served, housing evicted families. Many people deplore the chaotic way the place was run, and the scenes of violence that took place there. Some people are glad the place got evicted, because it was offering a bad image of the movement. I myself haven’t known the hotel well enough to add my say on this. But fact is that the Hotel Madrid, which has served a purpose one way or another, now lies abandoned yet again.