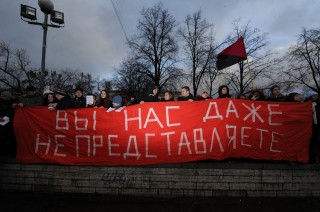 It is definitely great that so many thousands of people in may be 50-60 towns all over Russia should get themselves out of their homes out in the gold streets (it is winter time – and in some places it could have been quite easily 10-15 C below zero).

In Moscow they say there were about 150 000 people out in the streets protesting.

And as in other towns there were from 1000 to 5000 protesters (apart from SPb), the most important protest was in Moscow (150 000), because of the numbers and psychologically as the Kremlin citizens could see the protest out of their window – the protest was not a reported one, not the one lied about, but the one they could see by themselves out of their fortress.

So due to the uttermost importance of the protest in Moscow the Moscow protest was played badly by the opposition and played very well by the Kremlin for the benefit of the Kremlin.

There was an ordinary “permission” (one of many the same) for the protest meeting for 300 people on the Revolutionary square on the 10th of December.

But then the panicky Kremlin organised the treachery. Nemtsov (I wonder if you heard about this Russian politician) made an agreement with city mayor (because it is the city mayor who gives the “permission” for the protest) that the city mayor gives the “permission” for 30 000 to protest instead of 300, and in return the opposition takes the protesters to another square – THE SWAMP SQUARE, which is on the island between a river and a channel, and connected to the main land by small 3 bridges, which could be very
easily controlled by the police (and away – away from the Kremlin and the square is quite deserted).

So Nemtsov is one of the leaders in the political organisation of which I am the member. The whole organisation had supported Nemtsov’s betrayal (you see, the thousands of people came to Revolutionary square and then they were escorted by police, police cars, military helicopters over the heads of the protesters to the SWAMP SQUARE, so it was a protest against the government (and elections results) in concentration camp – the whole perimeter was heavily guarded, instead on the Revolutionary square that
would have been a protest of the FREE PEOPLE against the USURPERS – that is why it was a betrayal by Nemtsov) – because Nemtsov is the MONEY in our poor opposition organisation. There were really few people who called Nemtsov traitor, all the rest supported him, because he is the money.

I did not go to the swamp square, I was just watching people being sucked in by the security police gates, people forming the columns and marching away to the Swamp square. I and some other people had hoped that at least a small group of FREE PEOPLE will stay on the Revolutionary square and the group of us would have made our protest of the free people, but too few of us resisted the powerful call of the crowd instinct. None of my colleague resisted it.

Here a link to translated interesting videos regarding elections forgery in Russia.

On the botom left corner, below the video, you have to choose english to watch with english subtitles. Please don’t hesitate to correct the translation if you know russian or to add more languages.