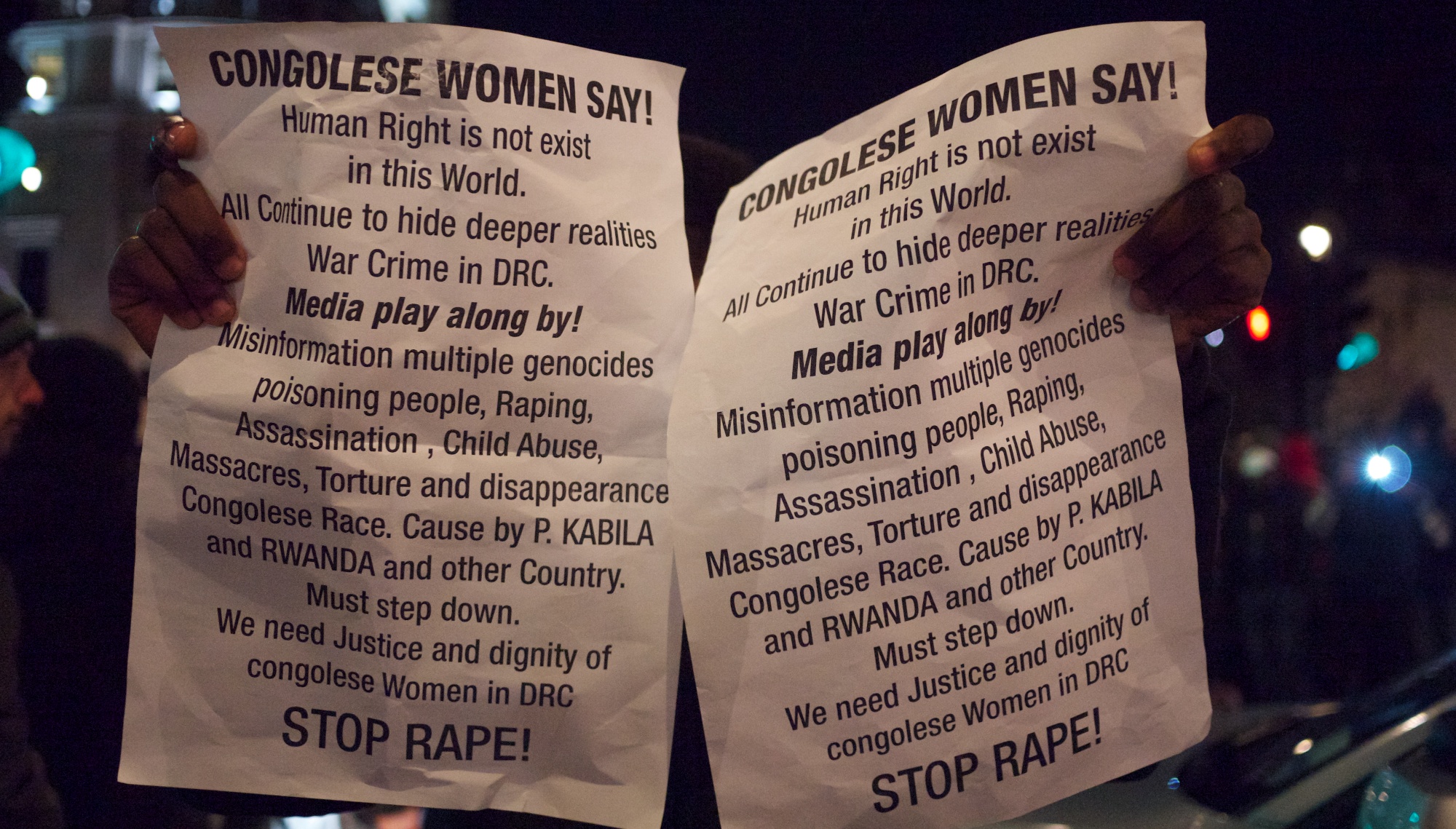 This evening there was a massive police operation in central london to control a passionate but mainly peaceful protest by up to 1000 congolese people which began in whitehall, spreading to trafalgar square, and with further breakaway groups marching through the west end. mainstream coverage has been minimal.

today’s protest follows two others this week, with serious clashes between police and hundreds of protestors outside downing street on tuesday, and on thursday evening oxford circus was closed down for a while, and police arranged for an empty train to ferry protestors to seven sisters station for dispersal in tottenham.

but you’d be hard-pressed to find much about these events on bbc or other mainstream media other than a brief report of 143 arrests this evening, with no explanation of the issues other than it being ‘a demonstration over election results’.

well, according to the very passionate voices on the streets tonight, the issue is years of mass rape, genocide, and repression (with UN estimates of more than 5 million, nearly a tenth of the population, murdered in the past decade) and the western states’ support for an illegitimate leader after rigged elections.

the protestors believe that joseph kabila, who this week was announced as clear leader in the first democratic elections in the country in 40 years, is a corrupt rwandan military man with a deadly army unit of 7000 soldiers who is supported by western interests. they believe that etienne tshisekedi has a much larger popular vote, with estimates of support above 50%.

it is not hard to see why the west would meddle in the affairs of this huge country. it has vast mineral wealth, being the main world source of ‘coltan’ used widely in mobile phones, as well as cobalt, copper, uranium, gold, diamonds, tin, and zinc. as is often the case in africa, despite these huge resources, the standard of living of ordinary people in this rich country has been spiralling downwards for years.

the congolese protestors see cameron, sarkozy, and obama as the three biggest hypocrites, looters, and supporters of the illegitimate regime responsible for the human rights abuses in their country. with the first results of the election coming out, they see western support as a key ingredient in the rigged vote.

on tuesday a few hundred congo supporters blocked whitehall outside downing street, and as police TSG cleared the road, one protestor was violently head-butted and received a broken nose (fortunately caught on video by activists and soon to emerge).

today, up to a thousand protested again in whitehall, and the road was blocked for hours with a huge police containment operation failing to get to grips with the protest, and breakway groups forming further road blocks around trafalgar square and other parts of london.

as i arrived at around 7 this evening, a group of a couple of hundred were sitting in the road at the south side of trafalgar square at the top of whitehall. with huge numbers of police engaged in containing the main crowd in whitehall, the road blockade lasted for up to an hour, and during that time, at least a hundred more actually broke through the police line in whitehall and joined them.

for the most part, the protestors were very passionate and committed but peaceful.

as hundreds of riot police flooded the area, an operation began to push protestors into trafalgar square and off any roads. more sit-downs occurred and police became violent in removing them.

eventually, this large group of protestors was pushed into trafalgar square, but as more riot police entered the square from the north, several hundred protestors made a break up the steps and marched along charing cross road. catching the police out completely and avoiding being kettled, they set off on a boisterous walkabout down shaftesbury avenue, and along piccadilly.

overstretched police became involved in occasional scuffles with protestors and there were several violent arrests.

numbers dwindled gradually, and i headed back to trafalgar square to see what was happening, but there were few protestors left there, just vast swathes of police lines.

i heard later that there were more than a hundred arrests around pall mall, apprently for “affray”, which seems most unlikely based on what i’d witnessed so far.

of course, among the boisterous crowd, there were some youths who took things too far, and i heard reports of photographers being attacked, and passers-by being harrassed. perhaps i was lucky, but my own expereicne of the people i met was that they were desperate to be heard, were passionate, loud, and boisterous, but completely peaceful and frightened for their compatriots.

they kept asking why the bbc wasn’t covering what was happening in the democratic republic of congo and were desperate for their voices and for the plight of their people to be heard.