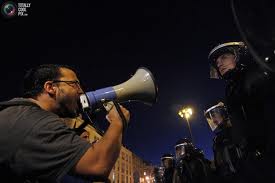 Our Platform 15 October, which is international, non-partisan and peaceful, demands the restoration of justice and truth with regard to the events of November 24th, and declares:

We witnessed and denounced the presence of police officers, who were not identified and not uniformed at the demonstration on November 24th in front of São Bento. These persons, hidden among the protesters, incited violence by words and actions, contrary to what has been stated “unequivocally” by the Minister of Internal Affairs.

This police action in a so called “democratic” set up is illegal and constitutes a crime. The police action on the picket lines that day was also marked by lawlessness and repression as they irrupted armed with shotguns and machine guns where the pickets were located, and sent riot police to attack and disperse these pickets.

We reject the idea of being, consciously and deliberately, designated as the “offenders”, “criminals” and other adjectives that clearly represent a personal and collective insult. This strategy has the sole aim to shut down our October 15th Platform as a political subject. The attack aborted the People’s Assembly scheduled for 18:00, at which time the disturbances began. A narrative of social terror is being built, to clearly criminalize the social movement, the events of the General Strike and the demonstrations that were a great success, but tapered by the events of “violence” exerted by the structures of power and their attempts to distort reality.

We protest against the random detention of some of our comrades, another attempt to reinforce this criminalizing narrative.

We are and we will continue to identify ourselves as a peaceful platform for political action, and we will not tolerate to be collectively associated with any act of violence of individual citizens who can make a revolt on their own right.

We reject the total alteration of the truth and propaganda that is underway, seeking to label as violent people and movements which struggle to defend their right and interests peacefully. The violence of the imposed austerity measures is undeniable, regardless of the number of smokescreens shed over them, everybody can see that. We accuse the government of violence, exerted directly and indirectly over the people.

In response to this shameful campaign, we inform you that we will arrange a new demonstration to be held in late January.

For all this, the Platform October 15 demands:

The criminalization of political activity and the repression is a clear sign of the times we live in, that democracy is threatened and undermined by the very same state that has the duty to protect it. The attempt to suppress the historical events which were the General Strike on November 24th and the demonstration held on that day serve as a warning signal to the progressive forces. We will not allow victory to any attempt to provoke fear and suffocate the popular legitimacy to claim for their dignity and rights. Therefore, we will be back on the streets in late January.