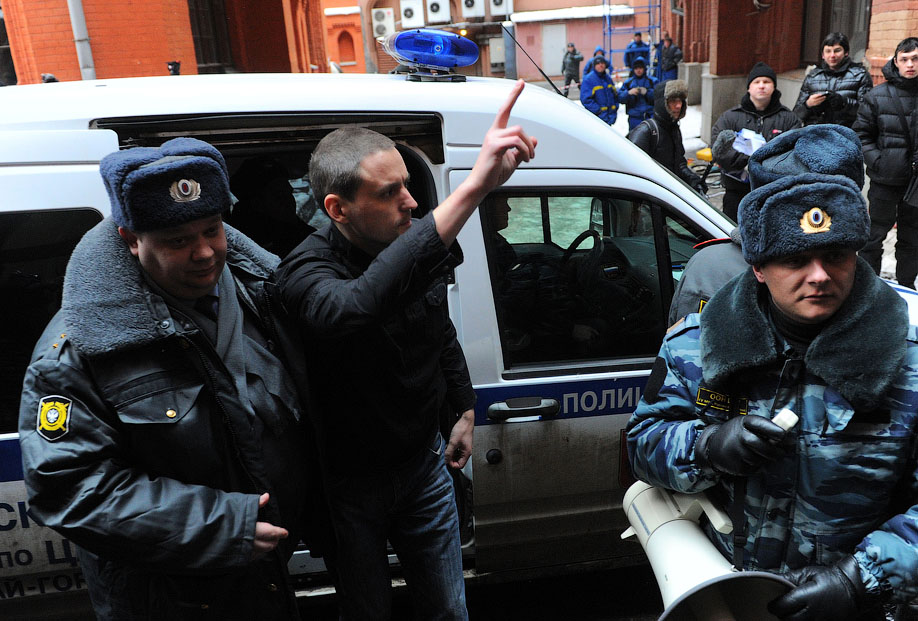 Russian people are very angry not only with the way the recent parliamentary elections took place, but, as well, with the corruption in the judicial system. That is why on a cold winter thursday evening so many of them attended a non authorized rally in support to Sergey Udaltsov and all the other political prisoners. Photo: more than 500 people came to Pushkinskaya square in Moscow to support Sergey Udaltsov on 29th of december.

“Sergey Udaltsov, the leader of the legally prohibited Left Front peaceful opposition movement, who was supposed to be released from jail on December 25, received an additional 10-day sentence instead.  It must be served upon the conclusion of a court-imposed hospital stay to recover from an ulcer developed during his dry hunger strike, the court determined in a separate ruling the following day[1].  In the most exciting moment of the politically motivated trial, his lawyer Nikolai Polozov tore out some documents from Udaltsov’s court file, and, with court officers in hot pursuit, handed them over to the opposition Duma Deputy Ilya Ponomarev.  Invoking his legislative immunity, Ponomarev refused to hand the documents over to the officials.  The recording of the incident was broadcast by Life News network, made infamous in recent days for broadcasting the illegally wiretapped cell phone conversations of Boris Nemtsov, another opposition politician.[2]

Justice of Peace Olga Borovkova, who had judged several processes dealing with opposition leaders, including Udaltsov, in the past, presided over the case. “I would have handed the documents over, had Judge Borovkova demanded,” explained Ponomarev.  “But they were full of irregularities. The pages were not numbered, and you could not tell from the file’s table of contents whether they even belonged.”  Journalists, the public, and even some witnesses were not allowed in the courtroom during the hearing on Sunday. These kinds of irregularities were pervasive throughout his detainment and latest trial.

The blogosphere has been abuzz with questions about Borovkova’s qualifications to be a judge, since the latest verdict.  The evidence uncovered suggests that the improbably young Borovkova, 27, was illegally appointed as an assistant justice in 2004, a full year before she earned the academic credentials required for the position[3].

Udaltsov was arrested illegally arrested by plainclothes officers on December 4, the day of the Russian parliamentary elections. Initially sentenced to five days in jail, Udaltsov announced a hunger strike and was taken to a hospital for medical observation. His sentence was extended after he failed to follow protocol when leaving the hospital. Udaltsov was later denied medical care until being delivered to the hospital in critical condition on December 18.  Although Udaltsov again declared a hunger strike after receiving his latest sentence, he felt ill again and left the court in an ambulance. Udaltsov is currently in the hospital and is eating by doctors´ orders.

Twin permitted rallies will be held to call for the immediate release of all political prisoners including Udaltsov.  The Moscow one will take place Thursday, Dec 29 at 6 pm at Pushkinskaya Square.  The one in St. Petersburg will happen on Friday, Dec 30 at 3pm in Lenin Square, near Finland Rail Terminal.  The Moscow rally was not originally permitted, and it will instead take place under the guise of a constituent meeting held by Ilya Ponomarev.  As of this writing, the Facebook page for the event has nearly 2,000 confirmed attendees[5].”

MORE PICTURES OF THE EVENT HERE

Release offered by the Volunteer Press Center – one of the independent grassroots organizations founded after the December 4 parliamentary elections.

For past press releases and other information, be sure to visit our website at www.24dec.ru (The site is currently available in Russian only).  Also, please see the  background information sheet about the rigged election, at
https://docs.google.com/document/d/15I1w8LJ7f1pRd9OHh4IcJWWDMKGN4msmVVLtscNWU6w/edit