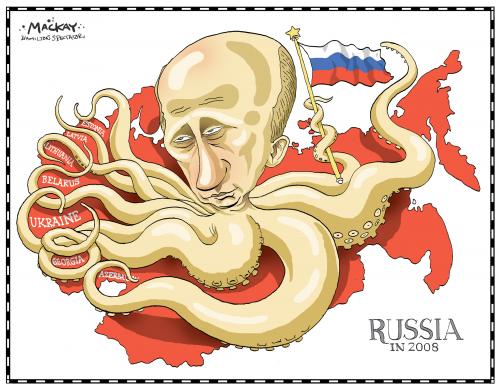 “May 13, 2000:  Six days after his inauguration, Vladimir Putin signs his first decree as president and proposes several bills. All are aimed at “strengthening the vertical of power”. One of the bills puts an end to elections to the Federation Council, the parliament’s upper house. Its members will now be appointed by regional governors and legislatures. Another gives the president the power to fire governors on mere suspicion of wrongdoing. The decree also establishes the positions of regional presidential envoys, a appointees to whom elected governors will now report.
June 2001:  A new law about political parties is passed. From now on, only national parties with offices in more than half the regions can participate in elections. Regional parties would be barred. Political associations will no longer be recognized.
January 2003:  The law on presidential elections is amended. The number of signatures needed for inclusion on the ballot increases from 1 million to 2 million. The maximum number of valid signatures from one region is reduced from 70,000 to 50,000. The time window for collecting signatures is cut in half. March 2004:  Vladimir Putin is reelected for his second term as President. International observers and the Golos election monitoring organization report a large number of violations, such as the disappearance of more than a million elderly Russians from the voter rolls. A study by the Russian Union of Journalists shows that the state TV channel “Rossiya” devoted 7 times as much airtime to Putin as to any one of his rivals. The gap was even larger on ORT, also a state channel, and a little smaller on NTV, a nominally private channel.

September 2004:  After the terrorist attack on a school in Beslan, Putin announces additional measures aimed at strengthening the “vertical of power.” Governors will no longer be popularly elected: they will now be appointed by the president. Individuals will no longer be eligible to run for the State Duma: all seats will be allocated to political parties proportionally to their share of the popular vote.  Only parties collecting more than 7% of the vote would be admitted, a threshold previously set at 5%.

Dec 2008: President Dmitry Medvedev pushes through a constitutional amendment that increases terms for members of the State Duma and the President are from four to five and six years, respectively.

June 22, 2011: The right-liberal coalition Party for People’s Freedom (PARNAS) is denied registration, and with it, the right to participate in the upcoming election.  PARNAS has over 45,000 members across 53 regions. Registration is denied because some of the signatures submitted by PARNAS in support of its application are deemed invalid. The law provides 14 different reasons signatures can be invalidated, including “expert opinion”. Any party can be targeted by the government using this rule. Out of 500 Moscow precincts where “Citizen Observer” placed its observers, no major violations were reported at 170. The organization compared these precincts’ election results with those of similar precincts in the same neighborhoods but where observers were not present.  Typically, an unobserved precinct reported voter turnout 25-35% greater than a “clean” one, and United Russia’s share that was three times greater. On the photo: TV broadcasting the elections results in several russian regions that sum more than 100%!
By plotting a graph of the votes cast for United Russia against the number of precincts, one can observe that contrary to current research and common sense, the histogram does not resemble a bell curve, which would reflect normal distribution.  This inspired a sign often seen at the rally, “I don’t trust you, Churov [head of the Central Election Commission], I trust Gauss”

Independent observers recorded dozens of instances of voting irregularities. Vladimir Churov, the head of the election commission, called them fake.

Dec 22, 2011: In his last annual address to parliament, President Medvedev vowed to reverse virtually all of repeal all the above mentioned changes to election law, with the exception of the increase in term lengths.”

Facts offered by the press committee of the russian protest movement –  a group of citizen activists, who do not represent any political party.