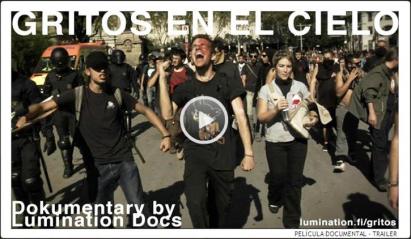 SHOUTS IN THE SKY is an observational documentary film about a civil movement that was born in May 2011 in Barcelona. Through an occupation of the main square the movement creates a new space that challenged the passivity in the society. As the uprising grows bigger, the state and the media uses many ways to try to discredit and stop the movement violently, but the movement has determined to resist peacefully.

In the film we follow many dialogues between people, police, ideologies, political and economical forces and the state. The story revolves around the center point of the occupation – Plaza Catalonya in Barcelona, which remained occupied for months to demand direct democracy and rethinking of economical and political structures.