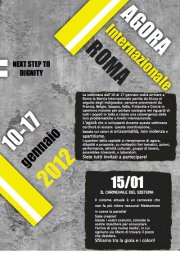 The International March to Athens has arrived in Rome after having covered on foot over 800 kilometers.

Around 11 am they have reached the limits of the capital and is expected they appear in the central Piazza del Poppolo around 3pm. The group consists of about 40 people from different nationalities who have also a support car and they have collected hundreds of claims in the different assemblies for which they have passed.

From today until wednesday 18th, the walkers will participate beside the organization of Agora Rome in a series of thematic assemblies in different neighborhoods of the capital. Are expected the mass arrival of sympathizers of the movement of indignation from Spain, France, Netherlands, Germany and the UK in the next few days to participate in the Agora Rome, the next step of dignity, a continuation of previous international meetings in Paris and Brussels.

The 15th is called a mobilization on the streets of Rome under the slogan Carnival of the System, according to organizers this is ironic march with festive character to demand the end of the financial dictatorship, recognition of the constituent assemblies and to display the non-violent character of the movement.