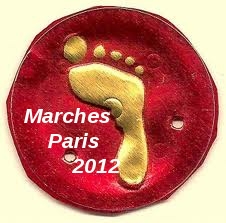 Call to all French citizens
We will walk with one main objective: to be open to all in order to create a convergence in a common fight and in order to support  the idea (among many others) which consists in creating a constituent assembly  A statement of precise claims is being currently written, and it will be presented during the marches and discussed during the citizens meetings which would be organized by theme.
Faced with the current system, both economic-social and environmental, that has forgotten the human and the living , our duty is to have a collective response and assert our demand for change. This response will manifest through our ability to come together and converge towards a common ideal. This citizens’ initiative requires the participation of all citizens, groups, associations, etc. We need to create an event that concentrates the largest number of people in Paris with the objective that the ones who should represent us, be obliged to hear and listen the voice of the people.
This unity  means taking control of our sovereignty. It means facing the crisis of representation and the ever increasing gap between politics and citizens. It is needed to send a strong signal, much stronger than just an electoral participation and to continue to propose a new vision of political commitment.
This march will be an opportunity to organize in each city that we cross themed events around  local issues and alternatives for a change. Ex: debates, popular assemblies with a specific theme, films, non-violent actions of civil disobedience, concerts, art projects, etc.
We support all groups and assemblies of France to make calls to demand the formation of a new constituent assembly.The new Constitution must be created by and for the people, it must be done in a transparent manner with the highest participation possible and in the most democratic way.
Any person or group of people can start their own march, decide of the itinerary and of the mode of travel. The idea is to get out of the 4 points of France. A Paris bike project has already been planned. We encourage you to use any way of transport to be all in Paris (on foot, tractors, motorcycles, horses, wagons, toddlers, etc.) More cities will participate stronger will be the message and the efficiency of this project.
We are currently thinking on many things to define how we can assert the ideas we already have  through petitions, referendums, etc. Any new proposition is welcome!
We are not calling just for one march to Paris but for many marches  to Paris. This project is open to all and anyone can contribute to its construction.
We are one,
We are a people,
We are people who walk.
Mail: marcheparis2012@gmail.com
Twitter: http://twitter.com/MarcheParis201
Facebook: http://www.facebook.com/pages/Marches-Paris-2012/151214914989073