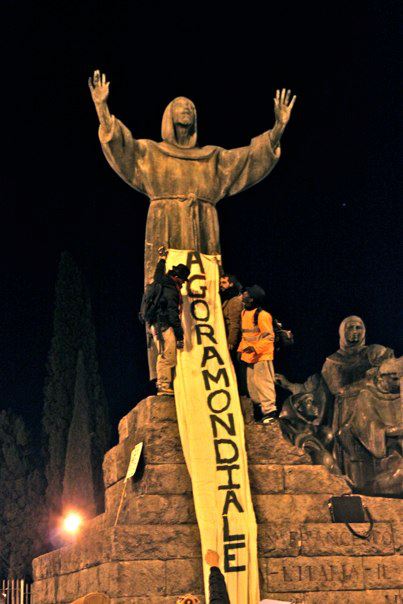 The first night of the March to Athens in his arrival at Rome has passed with tense calm. Following the first encounter with the Romans who were waiting in the piazza de Poppolo walkers have decided to put their tents in the the legendary Piazza San Giovanni, a place in the historical memory of the movement because there were the famous riots past 15o in Rome.

At first the walkers tried to decorate the square with banners that  they designed but appeared two vans of riot police who immediately requested the evacuation of the place. The group of the March decided to meet in Assembly  to decide what to do, on the other hand various groups of support were echoing the situation and an organization sympathetic to the movement of the indignant mediated between the police and the march and the police finally left the Piazza San Giovanni.

This sunday morning the march in Athens has led to the piazza San Pietri in the Vatican. They sat in a circle for the first assembly in the Vatican and the Swiss Guard that guards the place tell to the walkers the square was reserved for religious events, which is important to remember to say to religious groups whenever back to our squares. The march continued with the Assembly and after three hours of debate was closed the first outraged Assembly at the Vatican.

Then the walkers returned to the piazza San Giovanni where they plans to do a presentation assembly between the roman population and walkers.