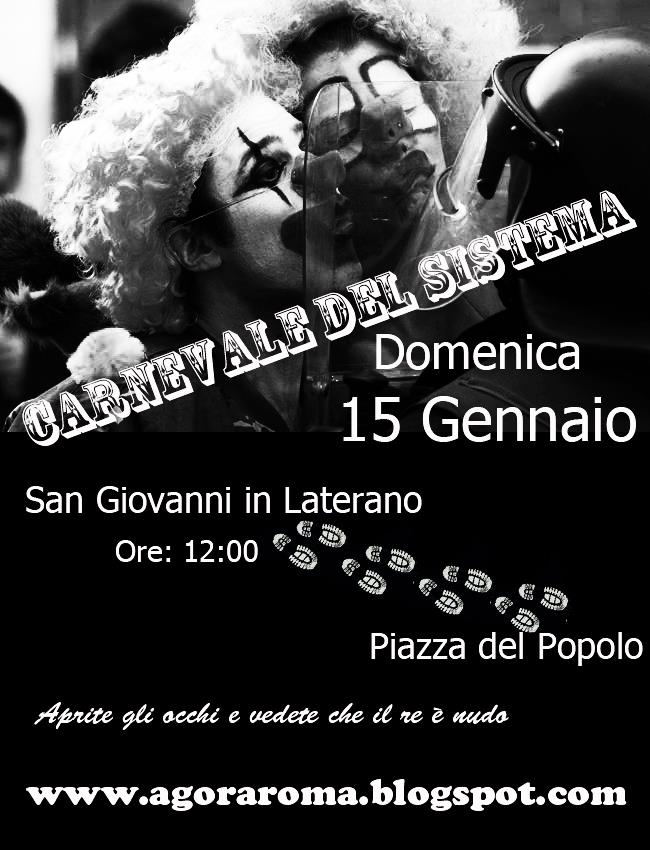 United in the Agora Rome construction

The general assembly last night in the piazza of San Giovanni was massive and participatory. On a night where low temperatures were protagonist the main subject where logistic affairs, then working groups such as cooking, action, communication, art, childhood and others were created. Working groups are opened to the cooperation of citizens and therefore has been established a series of regular meetings where those people interested in the Agora Rome can attend and bring their ideas to the community. It’s remarkable to point out the participation of Caracalla’s Assembly because it has been a well known encampment in the Italian capital. Day by day the involvement of Caracalla with walkers and supporters of the movement in San Giovanni are giving shape what already has become an enriching event.

On the other hand, the encampment is increasing with the arrival of people who have traveled to Rome from Finland, Greece, Belgium, France and Spain among other nationalities. The General Assembly take place and can be followed live from Piazza San Giovanni at 9 pm at the regular streaming channels from Agora Rome and March to Athens.
Streaming March to Athens http://bambuser.com/channel/marchtoathens
Streaming Agora Rome http://bambuser.com/channel/agora+roma+2012

From early morning, the camp of San Giovanni where Agora Rome was installed has been the place of several meetings based on the logistic of the camp, actions to carry out the next days and the communication strategy to keep informed both people who pass through the camp and those who follow the evolution of the Agora from other countries. The logistics of the encampment is very reminiscent of Sol square infrastructure as each day more people come both from Italy and other countries and has the needy of the spaces relocation to keep the square clean and tidy.

At noon the action team sent a message of support for freedom and horizontality in an action where three people simulated be enclosed into three representatives of power on behalf of the bankers, politicians and corruption. The gesture was well received by citizens who passed the square honked their horns in solidarity. In a moment the police has come to ask for identification but the action team has denied arguing that they were not numbers but people, the police left without viewing the documents.
Today action: http://bambuser.com/channel/agora+roma+2012/broadcast/2275370

After 3 pm started the press conference that opened Agora Rome. The campers sat in a circle and, with their voices amplified by a sound equipment, were explaining to reporters how, why and wherefore of their stay in Rome these days. Once finished the presentation of all the information, an attractive debate about the international character of the movement took place, where journalists asked over and over again about the overall situation.
Press conference: http://bambuser.com/channel/agora+roma+2012/broadcast/2275798

Following the opening of the Agora trough the press conference proceeded to continue with the program. The discussion focused on direct democracy. Originally proposals were generated from the different experiences in assemblies present in the debate. As the dialogue became deeper emerged a fruitful exchange of methodologies between assemblies from Madrid, Barcelona, Paris and Rome. The interest for keep building a dialogue about direct democratic has resolved better continue tomorrow with the debate. A good starting point for intercultural dialogue endorsed by the interest and participation of many locals.

The second day of the International Agora Rome has begun with the participation of the campers from San Giovanni in the demonstration called by the ” Waste Zero”, an organization that works to avoid the enlargement works of the landfill Malagrotta. The roman organization has a meeting with a representative of City Hall to demand their claims, they argue that the expansion of the landfill is a very serious attack to the environment. The walkers have invited the activists of “Waste Zero” to participate in the Agora Rome.

On the other hand, the logistics group of the encampment was divided into two groups: one has worked since the early hours in the construction of a “duomo” three feet high by six in diameter while the other has gone to Caracalla to bring material of the ancient Rome encampment in order to continue renovating the encampment of San Giovanni, from wednesday night San Giovanni encampent has about fifty tents and have arrived more participants to the Agora coming from London, Barcelona and southern France.

At 6 pm the assembly about the environment has begun. Have been presented several projects environmentally friendly life, especially rural and ecovillage projects, such as WWOOF – World WideOpportunities on Organic Farms, a group of poetic economy, which includes various ecovillages in Italy and the project ruralesenREDadxs organized in Spain. In the same assembly have been discussed the chance of seattle urban gardens as an alternative to ecovillages because for many people is very difficult to leave the city, and this has raised the question of whether rural migration is a real option for today’s society.

Thursday in Agora Rome started with good weather on the piazza San Giovanni, about 11 began the workshop called Manifesto de Libertade. After hours of meeting was proposed to continue on Friday from 3 pm. A few hours later was developed a workshop of disobedience and peaceful resistance where there was a simulated action to show how to resist any attempt to arrest. The group successfully resisted the attempt of three simulated police from remove any of the volunteers chained together.

Under the statue of San Francesco came together participants for the meeting on non-violence. The interventions ranged from violent resistance as a strategy to address violence as a weapon system. Other voices listed the difficulty in Rome to see that nonviolence is an effective strategy that has shown the shortcomings of the police. The meeting lasted until almost 7 pm which led to the general assembly to start an hour longer than the time planned.

Friday 13th was a busy day in Agora Rome. There was work on diffusion, art, action, communication and logistics from the camp of San Giovanni and intensified preparations for the Carnival of the system, peaceful and non-partisan citizen demonstration to be held on Sunday 15th.

By mid-morning a group from the encampment went to support the rally for immigrant rights protest to deplore the situation of enslavement of the undocumented workers living in southern Italy. It has recounted the events happened in Rossarno 2 years ago when some immigrant farm workers were killed in an action while protesting their situation of exploitation and labor deregulation. Yesterday’s demonstration was highly participatory and according to organizers, was a step forward in the fight for the rights of migrant workers where they are expected to regularize the situation of this group.

Throughout the day has been coming new participants to the Agora Rome, Roman citizens curious to know who approached the camp and participate in activities and discussions. An example is a group of 8 people from ‘Global Change’, a radio station in Barcelona that have come to join and give support in communication.