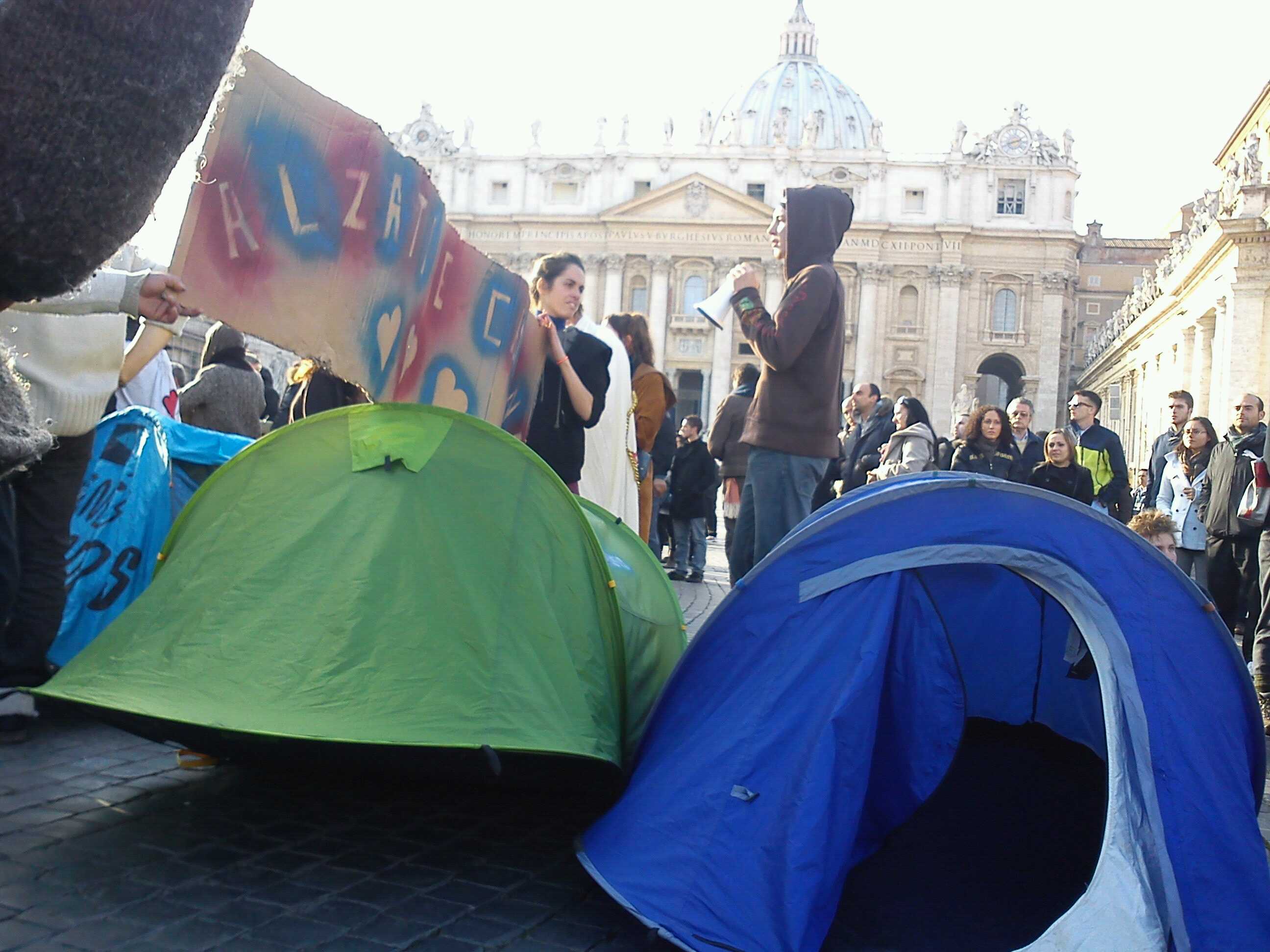 Agoraroma Debt audience
At  10 a.m. Agora Roma’s program opened with the debate about public debt,  where experts like teachers, journalists and members of collectives as  Reforma della Banca Mundiale, Rivolta i Debito[I, Banca Ética, European  Common  Good and the group of public audit of Acampada Barcelona. To conclude  the event, It was decided to start a permanent working group about audit  of debt in Italy to discuss the causes and processes of debt.
Experts explained that although each country has its own peculiarities, there are common elements  across as the fact that private debt (banks, financial institutions and companies) is quite superior to the public debt. For example, in the Spanish case, public debt represents only 16% of GDP, household at 21%. The remaining 63% belongs to banks, financial institutions and companies, who are the main causes of indebtedness in Spanish  country.
The debate was very productive, in sense of  interaction  and interventions. One of the   largely reiterated and demaned  issues of tax disobedience.
#occupyvatican
Meanwhile Mario Monti, the Italian Prime Minister was having an audience with the Pope, a group of indignados went to the Vatican to make an action with three symbolic tents and make a popular assembly at Saint Peter Square. As soon they arrived they set them and the people gather around them.
A person spontaneously jump at the center of the square and  climbed the christmas tree to call for the assembly. The rest of the people gathered there tried to help him to join them again but the police didn’t allowed it. Two activists break through the police line and they received charges, were handcuffed, were taken to the vatican nativity scene (yet set to be shown) to be enclosed (sic!).
The indignados from different countries began an assembly in front of the nativity scene to block the door and with the idea to avoid that the activists were taken to be imprisoned.
The press arrived to cover the event but the police didn’t let them to cover the new because they didn’t have an “special permission”. The journalists from the vatican press weren’t aloud to make videos, as well, they were said that are authorised to cover only vatican event and not demonstrations.
Some journalists decided to interview some activists outside the square because some policeman were taking photographs of them.
There were lived 2 hours of tense negotiations during which the police used to seize one of the cameras that recorded the protest and deleted contents. The police then took one of the fences of the nativity scene and used them to charge the protesters who gathered at the door to stop them from taking the three detained colleagues.
They began to charge indiscriminately to disperse the people away from the nativity scene’s door, violently punching, kicking and pushing and using batons and displaced them to the center of the square. The protesters sat down on the floor doing nonviolent resistance.
The police surrounded the group violently for a while, after  there were a third charge, which was meant to force protesters out of the Vatican, even they opened the gates that normally close the square. Once outside, police demanded their  identification, and noted down  data from the ones who  did not have any  documentation. After a hour   they where allowed to go.
A few hours after the 3  detainees were released too. Due to the policial charges there was a men who was injured (broken nose), he had to be taken by ambulance to the hospital, but at the time closing this note he was already back to the camp
‘Anti-fascist National Demonstration to support refugees’
The demonstration to support  refugees has walked through the streets of Rome, which ended in front of the camp with an assembly. We emphasize that the organization of the demonstration got to bring 5000 refugees around the country to particpate in it.
‘Carnival of the system’
Tomorrow’s program Agora Rome has a peaceful demonstration System · Carnival, “which will start from the Piazza San Giovanni at 12 am and end at the Piazza del Popolo to 16hrs. After the demonstration there will be a working meeting on and general strike.
More  information:
NEWS:
http://www.youtube.com/watch?v=DILjTtHvUSw&feature=youtu.be
Pope meets with Italian Prime Minister http://www.oecumene.radiovaticana.org/EN1/articolo.asp?c=554686
From acampadabcninternacional.wordpress.com