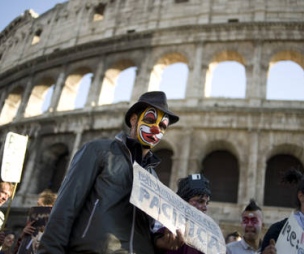 On January 15 2012, the encampment of the indignados in Piazza San Giovanni rose up in a festive  manner to hold a demonstration in the streets of Rome, in occasion of # carnavaleIndignati, one of many actions taking place during the social forum of Agora which is held until 18 January.
In the morning the camp was full of activity. Some people were cleaning, others painted  signs, or painted one and other and helped each other to reinvent themselves by dressing up. The Carnival was prepared as a parody of the system, aimed at making people reflect on the injustices of our democracy and financial system through sarcasm and frivolity.
The  indignant Carnival roamed through the streets of the historic center of Rome up to Piazza del Popolo, dancing to the rhythms of local band Malamurga. On their way people carried out performances in front of banks and multinationals, such as kneeling and bowing before  them. Also, Angela Merkel was symbolically married to Sarkozy, having Italian Prime Minister Mario Monti for a son among other  frivolities.
On arrival at Piazza del Popolo, a popular assembly was held on the theme of labour. Several people expressed their personal view of what it means to work in our society. The interventions highlighted concerns about people’s awareness of the social consequences of their labour. Each person’s labour creates something and all labour can be done in different ways. For  example, a teacher may instruct his or her pupils in  the values of the system ​​(individualism, maximum personal benefit), or otherwise can help them to become more critical, more free and more conscious.
Also today, Syntagma Square in Greece was occupied once again, and a meeting was held there on the same theme of labour. Apparently, the subject worries a lot of people.
More information:
Agora Roma: http://agoraroma.blogspot.com/
Videos Carnivale del sistema: http://bambuser.com/channel/acampadabcn_int
Facebok event: https://www.facebook.com/events/143113222467398/
————————————————————————————————————————
News
http://roma.corriere.it/roma/gallery/roma/01-2012/romaindignat/2/corteo-indignati-_1745b56c-3f96-11e1-8779-a112fb36ee96.shtml
http://www.abruzzo24ore.tv/news/Roma-Carnevale-degli-indignati-blitz-dentro-il-Colosseo/66816.htm