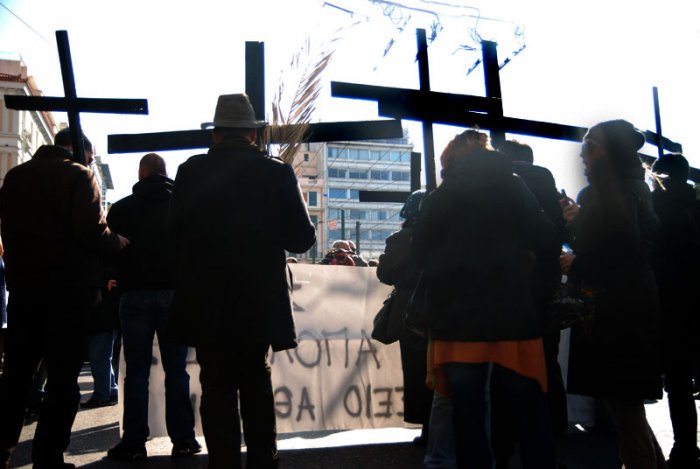 Today, January 17th marks a very important date in the recent history of labour struggle in Greece – responding to, and in solidarity with the struggle of the workers at Greek
Steelworks, the six Labour Centres of Greater Athens (Attica) and the Workers/Employees Union of Athens have called a city-wide strike.

Approximately 15,000 people took to the streets of the city on the day. What follows below is an excerpt from the text issued by base unions, workers groups, workers and unemployed in their call for the strike:

For the past two-and-a-half months, the caldrons of the Greek Steelworks remain unlit – but class war has been ignited instead. The terrorising by the boss Manesis, with his tens of firings and his plan for employment in turns, has been cancelled out in practice and shattered in the face of the unity and fighting spirit of the tenacious workers and in the face of the river of solidarity, an oxygen-feed for the continuing strike.

For two and half months at the “Gates of Fire” [title of an independent documentary on the strike, in Greek] the striking workers show us the way of struggle. A struggle that has inspired the unpaid workers at the Loukisa factory, who have been denied their wages for the past month. The struggle that strengthens the workers at ALTER TV station, unpaid for months, those at the Eleftherotypia newspaper; it strengthens the resistance of workers at Notos Galleries struggling against employment in turns; it led the workers at the factories of AGNO and MEVGAL to victory.

The bosses, after the troika and the greek strate paved them the way, believed they could easily in the midst of the crisis suck out the last remains of the blood of the exploited. They have started to be contradicted by reality.

Now, more than ever, we must promote class solidarity and our common struggle. We must all, workers, unemployed, locals and migrants, not merely stand in solidarity with these struggles, but we must turn every workplace into a pole of struggle, without waiting anything from party or syndicalist bureaucracies.

Original text in Greek
http://athens.indymedia.org/front.php3?lang=el&article_id=1368935
Photos of the vents on realdemocracygr.wordpress.com