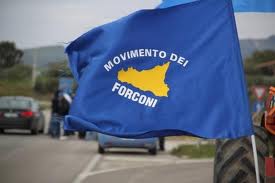 Today is the third day of protest in Sicily. The island is almost paralyzed.
In the island are protesting truckers, farmers, fishermen, craftsmen associations and merchants. Students are organizing demonstrations in solidarity, occupying roads and harbours. In Gela they close the entrance to the refinery, threating the port operations. Hundreds of trucks are at Villa San Giovanni harbour trying to ship to the big island with tons of goods (fruit vegetables and dairy supplies) will soon putrefy because the trucks cannot reach the shores of Sicily island. This stop is having a price on Sicily in terms of loss in their economy. The stocks of fuel are scarce and in many areas of the island are over, same for food, with empty shelves in supermarkets and some smaller business are already closed. People are starting to fear the food that comes from the black market. Truck inventory is escorted by the police.
The protest against increases in fuel (40% taxes on top of the basic price) and road toll, but this is just the top of the iceberg. The leaders of the movement speak of “a cry of despair and revolt of the workers on the island.” This is not an usual mobilization that gathers social sectors and political groups that have little in common: waving separatist flags next to the Forza Nuova (extreme right wing movement).
The risk of exploitation is as always very high. Even more in a region like Sicily, perhaps the one that most supported the center-right government led by Berlusconi, who has led the country to bankrupt. Many people believe that fascists and mafia are behind and within the movement. There are those who ask the promoters of the protest to distance themselves from people linked to the crime who are seizing the moment to join the protest as victims to have a sort of control.
Prosecutors in Palermo confirmed the possibility of such suspicious, but it is unknown whether there are already ongoing investigations.
Facebook group: https://www.facebook.com/pages/Movimento-dei-Forconi/254645254561355
From acampadabcninternacional.wordpress.com