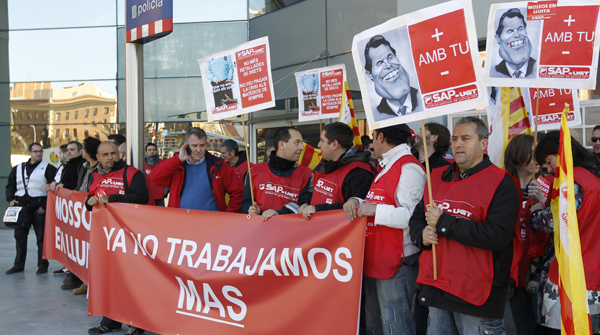 About 2,500 catalan police, according to the unions, or 1000 as Guardia Urbana said, have cut half an hour today at the Avenida Diagonal in Barcelona after failing the meeting with representatives of the Interior Ministry to address the planned wage cuts.

The agents have a sit in the middle of the Diagonal and they have invaded with the cry of  ’hands up this is a robbery’ and posters like ‘combating Mossos’ and against the cuts.

Previously, union representatives had met with Interior, although an hour after the meeting ended because, according to unions, the department has told that cuts are inevitable, as had already advanced catalan minister of Interior, Felip Puig.

After the failure of the negotiations, the SAP-UGT spokesman, Valentin Anadón, stated that “this attitude is blowing the Catalonian public safety” and, to this immovable stance, announced new protests for saturday.

SPC David Miquel said that after the meeting on friday the conflict is served, and from now the catalan police start with “stronger actions.”

For Antoni Castejón (SME-CC.OO.). The meeting was a “pantomime”, because in addition Puig has not attended as they had asked to the unions, however he clarified that they are still open for negotiation.