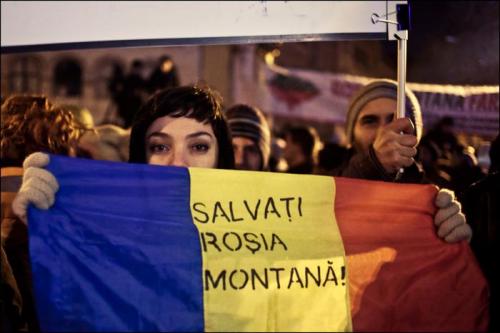 Romania: mass demonstrations are announced for next week.
There are anecdotal facts apparently become in the catalyst for claims and desires for change, actions that transcend even the goals of their own prosecutors. It happened in1955 when Rosa Parks refused to give up her seat in the front of the bus he was traveling in Alabama, recently was repeated in Tunis, in december 2010, when the young street vendor and student Mohamed Bouazizi decided to burn himself  tired of  police injustices and a future without perspective.
It happened again in Romania. The drop which overflow the glass and the patience of a people historically habituated to resign themselves to suffer took place on january 11th when President Basescu spoke on tv channel Realitatea.  He addressed in a superbly and petulant manner demanding the immediate resignation of the secretary of State for Health Raed Arafat, one of the most valued in the country, for Arafat opposition to the proposed reform in health care without debate promoted by the ruling party, the conservative LDP.

Protest movement, which at first was intended to show solidarity with Arafat and the rejection of the controversial draft law, suddenly took a different turn, becoming a wave of protests -of an unknown intensity with an unexpected citizen participation not seen since 1989-, also has spread to over 43 cities.

Nothing usefull for Basescu, surprised and distressed by not expecting an answer, has requested the withdrawal of the draft health reform and the return -acceptable to him- of Arafat in his role in the Ministry.  In this cases when the fuse of discontent turn on later is difficult to turn off.

The absence of leaders, the unions and the opposition coalition USL (Union of Social Democrats and Liberals) were maintained in a first moment to the expectation,perhaps fearing the failure of the protests, and the absolute heterogeneity of its components have raised doubts about temporal continuity of the protests.

Heterogeneity does converge in the same case to officials and pensioners to whom the government cut 25 and 15% respectively of their wages and benefits. Nostalgic of the communism as Ovidiu Gheorghe, 80-year-old man bitterly regrets his pension of 180 euros “I can not pay for medications I need and live with a minimum of dignity,” non-partisan citizens than show their rejection to the whole corrupt political class (the Court of Auditors has just released than in 2010 was spent ”irregularly” 9,000 million euros), 1989 revolutionaries to whom the government has just suspended its monthly assignments since january 1th, extra-parliamentary political parties from different coat- from the Green Party until the extreme right group Noua Dreapta, through more or less bizarre figures who want to use the protest as a marginal platform- the ultras football whose sole purpose is to provoke clashes with the police, environmentalists opposed to the Rosia Montana gold mining (mining project could cause irreparable damage to the heritage and ecology of the country),  feminist like Mihai Tudorina -a member of Filia, a feminist association who demands social visibility and policy inlusive with romanian women, or opposition parties members and unions that do not want to get off from the  protests that benefit them indirectly.

Basescu and Prime Minister Boc facing the protests of the weekend with an eye in a week that is expected fatal to their interests.

On the one hand, the Interior Minister Traian Igas is under pressure to resign or explain police brutality developed in Bucharest (http://youtu.be/0BlqUWqMH2w) to thenumerous abuses and disseminated through the channels of socialization, it has opened criminal case file to four riot police.

From Strasbourg, the europeans Social Democrats (PSE) and liberals (ALDE) haveissued a statement condemning ”We express our concern over the increasingly anti-democratic behavior of regime in Bucharest, where the President has exercised its powers to the limit of the Constitution ”. They also recalled that while adjustments are necessary at this time, especially if they want to receive the next loan transaction up to 20,000 million euros in 2009 negotiated with the IMF, it is incomprehensible at the same time beacuse Romania has only been able to absorb the 3% of European funds because of their lack of administrative and widespread corruption.

USL opposition has requested for Monday, 23 convening an extraordinary session of Parliament where the Prime Minister Boc demand explanations for police abuses, the suspension of President Basescu and the immediate convocation of early elections. However, the chance of success these last two proposals are scarce, the opposition lacks the necessary majority.

To finish the particular Vía Crucis of the government,  for the next week have been called three different mass demonstrations: revolutionaries of 1989, environmentalists opposed to the project Rosia Montana and retired military union.

The last three days in different European cities including London, Lisbon, Vienna, Rome and Paris have gathered dozens of Romanians demanding the resignation ofPresident Basescu. In Spain, are scheduled for this weekend protest outside theembassy and consulates in Madrid, Barcelona, Castellón and Zaragoza.

According to political analyst Andrei Taranu: “If the next week demonstrations are successful, Basescu will be forced to make conciliatory gestures as they could be a massive remodeling present government or even make the call for early elections.”

Negative expectations for a president that barely exceeds 15% approval in the recent polls and face a year in which a legislative elections will take place and can be a political earthquake in Romania.