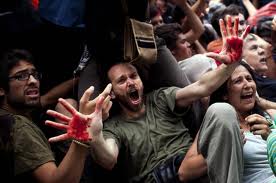 The security ex deputy mayoress of Barcelona, Assumpta Escarp, the managing director of the Mossos d’Esquadra (Catalonian Police), Manel Prat, the responsible for the public order supervision of the Catalonian police, Antoni Antolín, and the riot poice chief, David Bordas, have been charged by the magistrate as a result of  the most controversial street cleaning operation in the recent past, which ended by beating even the journalists identified properly. Before taking this step, it has been confirmed that the injuries medical reports presented by the reporting party are consistent with the police charges which shameful images were seen all over the world.

After investigation opened against the Counselor of Interior of the Catalonian government, where he was considered parliamentary privileged and thus protected  against trial, Court of First Instance number 4 in Barcelona has summon other defendants such as the people in charge of the cleaning services of the square in Barcelona where Occupy-15M protesters were removed last May 27 because, or so they said, the celebration of a football victory at that square.

One of the most contoversial points has been the impossibility of identifying police officers at the square because they managed to hide their badges while doing their job. Only one of the riot policemans could be identified, who may be didn’t realize that their colleages weren’t hiding his badge because of the noise while cleaning the square.We will see how can the four defendants explain the police brutality carried out by riot police…