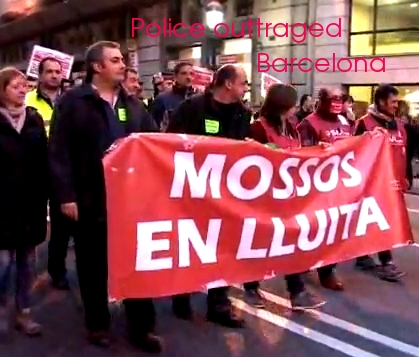 On Saturday afternoon over a hundred thousand people participated in the rally against the cuts the Catalan government. The demonstration was called by trade unions, the Catalan Social Forum, 15M movement and other groups.

This confirms the Catalan police openly participated in activities against the present system of government. It is a fact that the demonstrations in Barcelona can see cops protesting with posters, banners, flags, etc. and at the same time, riot police guarding public buildings. A double moral difficult to understand from the perspective of the social demands.

The participation of the Catalan police union has also recently declared that efforts to resolve the crisis may be more forceful, the police remain unresolved as education and health sectors have seen their benefits cut provocating seriously damage.