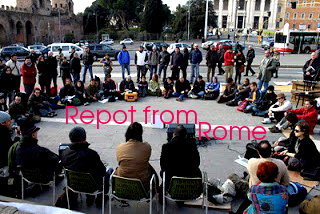 The movement started in May, 2011 in solidarity with the Spanish Revolution organizing non-violent actions, regular General Assemblies and visits in the Spanish camps. Last summer they projected the decentralization to the neighborhoods working on four different areas of the city, but only the assembly of Monte Verde is still active.
In autumn, they put all their energy into mobilizing for the 15th of October but different political parties, syndicates and other collectives called demonstrations for the same day. 200.000 people took to the streets with a lot of confusion. In a big explosion of violence manipulated by the police and some violent collectives, the indignati succeeded in accomplishing their objectives : a big General Assembly in San Giovani and the occupation of Piazza Santa Croce in Gerusalemme.
At the height of the movement, during the better seasons, the assemblies grew to 700 people, who formed many different commissions: ecology, labor, education, international, process, neighborhoods, handicapped people, etc, strategy and self-formation, action, non-violence workshop, spirituality, democratic re-appropriation, art and projects like a collective garden in the camp despite the accusation of violence and partnership entertained by media and political organizations.
But inside manipulations of the information, in this case a rumor of eviction by the police, made everybody move this attractive camp to ‘Caracala’, a dark and isolated garden in the south center. A lot of people left the movement during this transition because of the conflict generated by a few people who don’t believe in the concept of horizontality.
After some conflictive assemblies, it was decided to terminate this camp when a majority of the campers were inactive, alcoholics and sometime with psychological problems. It was during this critical period that the march to Athens arrived in the capital.
The walkers immediately decided to start a new camp in San Giovanni, the symbolic place of the explosion of violence during the 15O, in order to establish the AgoraRoma : one week of creative actions, debates and international exchanges, with as the main event, the quick occupation of the Vatican and the Carnaval of System.
After the end of the International AgoraRoma and the departure of the walkers, the indignati decided to restart the movement quasi from zero in the same place as the two weeks event, with assemblies every sunday afternoon.
The two last assemblies were dedicated to the restructuring of the movement in a friendly and cohesive atmosphere. Here are the minutes of the last meeting:

About 35 people started the assembly after about a half-hour delay.
They started with a logistic topic about materials and finances and everybody was invited to put some money in common in order to buy a new megaphone. Responsibility
for the money, for the buying and for the storage was designated.
The second point was about working groups and content of the movement and the principal proposal was to reduce the number of commissions because of the lack of people, keeping process, communication and international commissions, creating the ‘outreach’ commission to find external supports and joining all the other commissions about interests (debt, ecology, handicapped people, labor…) in a new ‘content’ commission.
The objective was to simplify the organization of the movement and to adapt it to the size of the assembly, but first of all, to call for a second assembly every week about political content in order to write the first manifesto of the movement and sophisticate some concrete demands.
After a passionate discussion, they built consensus on this proposal and on the official new name of the movement: ‘AgoraRoma’.
The assembly was closed with feedback, reports of a debate organized in a self-managed and occupied school, others in two social centers with Spanish people still in Rome, of a conference about the debt where it was decided to start a big campaign of information through weekly videoblogs about the crisis, an action of solidarity with Greece to send materials to associations, the announcement of a meeting with people occupying lands the next day, of a national meeting on skype also the next day and the fresh news of the Catalan police (Mossos) protest the day before in a demonstration against austerity.