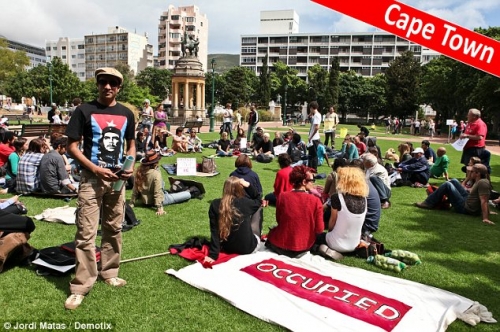 Suffering from the highest income divide and the worst violence in the world, the time has come for the people of S-Africa to rise up and reclaim their country.

This Friday January 27th, people from the poorest communities in Cape Town, South Africa will be leaving their homes to take part in a long march towards beautiful green open spaces in an area of the city called Rondebosch Commons.

All are aware that a great non-violent leap was made in 1994 when the Apartheid regime came to an end and South Africa held its first ‘democratic’ multi-party elections. But what many of you are unaware of is what happened since Mandela gave his famous “Never Again” speech.

While a symbolic multiracial government was now in power, the neo-liberal capitalist system which was already in implementation decades before was allowed to continue to pick up pace and basically our country was sold to the highest bidder.

Corporations from America to Europe through Israel and Saudi Arabia and all the way East to Japan, China and Australia have a dominant control of our countries resources and property while we the people who were already poor are becoming even poorer.

This means what you think it means. It means that those in control of the struggle movements of the past, once they reached power sold their souls to the corporate devil overnight and took their parties with them, with the exception of a few. The South African government with its two dominant parties the African National Congress and the Democratic Alliance passed neo-liberal economic policies over these last 18 years such as GEAR and NEPAD that saw the rich get richer, the poor get poorer and millions lose their jobs.

It may surprise you, but today, 18 years after 1994, South Africa has the widest class divide in the world. In a nation of 50 million people, 40 percent are jobless. Among the balance who have jobs, the poorest 50 percent collectively earn 6 percent of the wealth while the wealthiest 12 percent earn 50 percent of the wealth. South Africa has Africa’s strongest economy in terms of income but has the world’s worst disparity in wealth distribution.

What gets said far too little also is how this greed has a direct effect on our society as a people and it is this that I would like to emphasize. What many of you do already know is how violent South Africa is. It takes a little imagination to figure out the logical source of this violence, as science shows that the wider the class divide in a given area the more violent that area becomes.

We have the widest class divide in the world and therefore we have the most violent society in the world. While I of course do not condone violence and crime it would behoove anyone concerned to consider the source so that it may be firstly known how to eradicate it and secondly to know who the biggest criminals are.

A person initially does not make the decision to first steal except out of hunger or need, a woman does not make the decision to sell her body except out of desperation and a person does not decide to intoxicate themselves with drugs except to escape a bleak reality. And so the more desperate the situation gets the more violent and perverse the acts become.

So while you may have heard of South Africa’s violence it may surprise you to know that over the last six years of war in Iraq, more South Africans died from murder alone than the total number of people killed there over the same period, the biggest warzone of the 21st century. In fact more South Africans are murdered in one year than the total number of civilians and soldiers combined in ten years of war in Afghanistan, the longest ongoing war of the 21st century.

One in four of our women have been raped, we have of the worst statistics of violence towards children and of the worst drug related crimes in the world. Besides the corporations that control our resources, we also have mafias and gangs that control many of our neighbourhoods and streets.

So it is with this state of affairs in South Africa as the backdrop that I speak to you about a great revolution that is coming.

It is a revolution growing in the shame a man feels not being able to provide for his children. It is a revolution building among the realization of many that they are working in a non-ending cycle of wage slavery even though they are sure that they were born as free men and women.

At a time when the South African state police are growing more violent towards peaceful protesters in both ANC and DA controlled municipalities, and with a year passed where more South Africans were killed in police custody than in 1985 which saw the peak of Apartheid, it is the sentiment of some that they would question my ‘radicalism’ and the radicalism of those like me.

Why not just ask for reform instead of speaking of revolution against politicians and corporations? It is then that I recall a story I heard from Arab folklore that there was once a king who killed a common man’s brother. At a time when it was the norm for kings to kill common people, it amazed the people that the mans brother laid in wait until he one day killed that king. The people then questioned him in obscure logic: how can you kill the king in exchange for his killing of your brother a mere commoner? To which the man replied: “my brother was my king”.

So I say to Jacob Zuma and Hellen Zille that I hold you responsible for the hunger and thirst of millions of South Africans, the heartache of parents losing their children to drugs, the despair felt by the families of every soul murdered and every woman raped in this country. Everyone of them are our Kings and Queens. My queens were Anastacia Wiese and Mikayla Roussouw, young girls sliced to death in the Cape Flats.

And to Patricia de Lille, the mayor of Cape Town who has threatened to stop the people’s summit from taking place, I say that you are not our Madame and we do not work in your kitchen.

I have worked with many activists across the country and have been inspired by their energy, positivism and their courage and with these inspiring people involved in the struggle I have no doubt that while it may take blood, sweat and tears, that the people, all the people will eventually reach those beautiful green open spaces.