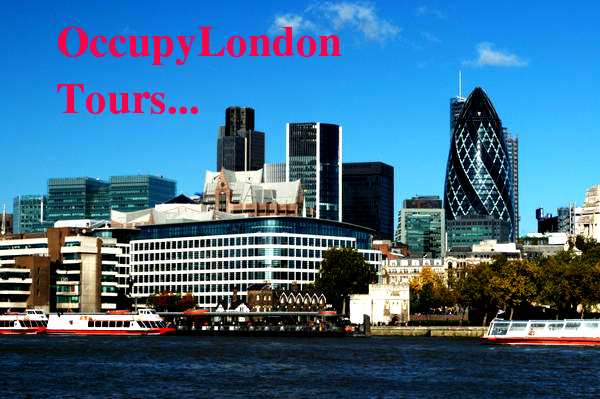 Bored with Big Ben? Tired of the Tower of London? Let us show you another side of the capital with our informative and entertaining tours. ‘Enlightening’ – the Independent

After the success of our first tours, we are holding additional tours on the dates listed below.

The most expensive place on the Monopoly board, and the no.1 destination for hedge funds in Europe. Among the luxury hotels, boutique shops and exclusive clubs, we’ll take you to some of the secretive institutions that operate in the shadows of the world economy. Take a walk with Occupy London as we delve into the murkiest corners of ‘hedge fund alley’…

Meet outside Green Park tube (Piccadilly north exit). Look out for the tour guide with the umbrella! The tour takes around two hours.

London’s brash new financial district, home to some of the giants of the investment banking world. From the big banks to the ratings agencies, from the auditors to the regulators, we’ll tell the story of the financial crisis in one of the places where it all happened… Those of a nervous disposition should be warned to expect tax dodging, financial chicanery, and bonus bonananzas.

Meet outside Canary Wharf tube. Look out for the tour guide with the umbrella! The tour takes around one hour.
Thursday 2nd February, 6pm
Thursday 9th February, 7pm (later time)

And look out for upcoming tours of the City, to be announced soon!